Trump had to send a message to all parties supporting Assad that he won’t just resort to Syrian talks but will be part of the joint offensives in Syria, Tariq Alhomayed writes 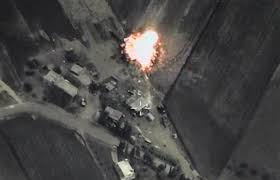 All over the six years of the Syrian crisis, all parties involved never took former U.S. President Barack Obama seriously. Moderates didn’t believe him and extremists realized he couldn’t go into battle. Damascus criminal Bashar al-Assad understood that Obama wanted to pass time until the arrival of the next president for the Syrian crisis to become the latter’s issue.

Like Assad, Russia decided to use its power in the crisis after it became certain that Tehran had failed to protect the Syrian president, who was about to be ousted back then. Moscow was aware that the best time to intervene in Syria would be during Obama’s presidency, in order to impose the status.

The right moment for the United States to enter Syria was in 2013, after Assad used chemical weapons. It was then that he had crossed all the “red lines” set by Obama. When Obama did nothing about the chemical attack, Russia understood that it was facing a weak and hesitant president.

Today, we are under Trump’s presidency, and for his administration to have a value and significance in the Syrian crisis, the president must establish a strategy different from that of his predecessor. Trump also had to send a message to all parties supporting Assad that he won’t just resort to Syrian talks, but he will be part of the joint offensives in Syria. Such a message can make it clear to every party that they are not faced by an incompetent and hesitant president, but rather one who can launch strikes against the Assad regime.

Iran and Russia target Syrians in Syria. Moscow even targeted the opposition which accepted the political solution.

We all remember how Russia manipulated Obama for a long time when pushing for the definition of opposition and extremists to be determined.

In Syria, too, Israel targets the Assad regime and the terrorist group Hezbollah. Even when Turkey downed a Russian plane, there was no war, and then the Turkish-Russian relations were even revived.

Therefore, everyone is fighting in Syria and striking targets, except the U.S. The Russian-Iranian contempt for the U.S.' power reached an extent that they called for talks in Astana, during which Assad allies joked that neither Washington nor Saudi Arabia are worthy of attending, and not even other Western powers either.

Now, Trump has proved to everyone that he is ready to act and target the Assad regime, and the White House spokesperson, addressing Assad, said: “If you gas a baby, if you drop a barrel bomb onto innocent people, I think you will see a response from this president.”

Clearly Trump decided to intervene in the Syrian crisis through a strong and influential strike, not through an envoy. We will be able to see that in the Syrian talks, no matter what Russia or Iran might say.