Washington aims to limit Tehran's political weight and break the line of Iranian influence by engaging in deal-making with Russia, Ibrahim Hamidi writes for Saudi-owned newspaper 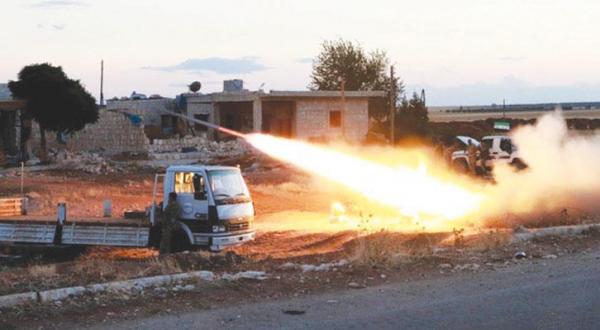 During a meeting of American military officials and diplomats with Russians in Amman a few days ago to discuss setting up a “safe zone” between Damascus and Jordan, a group of regime forces and an Iranian militia advanced from Palmyra toward Al-Tanf near the Iraqi border, which contains U.S., British and Norwegian special forces. The American army used its communications channel with its Russian counterpart under the conflict-prevention agreement to send an urgent message: the advance of the military convoy must stop. A little while later, the Russian response came that the regime forces had stopped, however the other Iranian militia continued to advance. Americans conducted warning strikes… and then destroyed them.

This was the first incident of its kind: the American army “defending” territory under the control of Free Syrian Army units which it supports. This differs from the missile strikes on the Shayrat air base a few weeks earlier, in that the latter came after a chemical attack on Khan Sheikhoun and within consideration related to Russia’s position, the “red line” and use of chemical weapons, as well as the Trump administration’s overturning the hesitancy of the previous Obama administration.

In June and July last year, the Al-Tanf base was hit by Russian bombs more than once. Some of the raids nearly struck American and British units. At the time, tension arose between U.S. Secretary of Defense Ashton Carter and the White House, because Obama did not give authorization to respond to the Russian strike.

On May 18, the American strike on the Iranian militia allied with Damascus came days after the U.S. Secretary of State Rex Tillerson informed the Kremlin that Washington had no objection for the regime areas to be under Russia’s control, but on the condition that the Iranian Revolutionary Guard stays away from these areas. The Trump administration insists on Syrian President Bashar al-Assad departing from Syria’s future, with flexibility regarding the date and manner of his exit. The Americans also informed their Russian counterparts that they were uninterested in the political negotiations in Geneva and were “monitoring” the Astana negotiations to establish four “de-escalation zones.” However, Washington wanted to test Moscow’s intentions and the extent of its ability to break with Tehran, and decided to open military and diplomatic negotiations with the Russians in Amman to begin setting up safe zones in southern Syria.

Sessions were held for American and Russian officials in the Jordanian capital with the participation of the U.S. envoy to the international coalition against ISIS, Brett McGurk, and Deputy Assistant Secretary Michael Ratney. It is notable that during the second meeting, McGurk was informed that American bombs had struck an Iranian militia and he, in turn, informed the Russians sitting in front of him. They did not withdraw from the meeting, but continued to discuss the details.

It is expected that another session will be held in Amman to discuss the safe zones, as Western thinking proposes an understanding with Moscow to include Daraa, Quneitra, the Golan and part of the Suweida countryside as an extension to the Al-Tanf camp and the Al-Walid crossing with Iraq, whereby local councils and humanitarian corridors will be set up in opposition areas and refugees and displaced people will return, as well as the commencement of reconstruction projects. There is a possibility that an understanding will be reached about a symbolic presence for Damascus at the Nasib crossing with Jordan and that the official Syrian flag will be raised at specific points in the “security strip” which needs to be free of Iran’s militias and Hezbollah. In this, the Russian Defense Minister Sergey Shoygu noted that “constructive communications” had been held with his Israeli counterpart Avigdor Lieberman regarding safe zones in southern Syria. A diplomatic source said that Moscow had proposed “the return of regime forces to the south without the militias, however Washington has insisted on the understanding with Moscow about establishing the safe zone.”

Liberation of Raqqa and Deir-ez-Zor’s “Jazira”

In parallel with this first project, which Western countries want to use to test Moscow’s intentions and the extent to which it can pressure Tehran and its allies, there is another American project in the country’s northeast based more on a military approach. Washington has decided to depend on the Syrian Democratic Forces, including the Kurdish People’s Protection Units (YPG) to liberate Raqqa from the Islamic State (ISIS) despite Ankara’s reservations and the anger of Turkish President Recep Tayyip Erdogan, with the expectation that the liberation of Raqqa will not happen before the fall of this year. However, Washington and its allies are open to discussing plans for stabilizing Raqqa after the liberation, with the role for Arabs being clearer, including them to remain in their city under a civilian council they manage. Because some countries have warned Washington about the possibility that the YPG could hand over areas they liberate to regime forces under the supervision of Russia, as happened in eastern Aleppo, there are designs to pressure the YPG to keep them apart from Damascus (politically and militarily) in exchange for political incentives related to acknowledging Kurdish rights and their Syrian entity, in addition to the military bases which the Americans have set up to support the Kurds.

In the event that the safe zones are successful in southern Syria with American-Russian-Jordanian consensus, it will be possible to move to implementing the “de-escalation zone” in Idleb with American-Russian-Turkish understanding. Moscow, which is negotiating with Washington in Amman in the south, is negotiating with Ankara and Tehran in the north. The importance has become apparent of the Russian-Turkish-Iranian meetings to draw the borders of the four “de-escalation” areas for approval on June 4 in preparation for the deployment of observers from these countries and then from other countries after the issuance of a United Nations Security Council resolution. Ankara wants to expand the Idleb area to include a wide part of the western countryside of Aleppo and the eastern countryside of Lattakia, but other countries require a decisive Turkish decision to eliminate the Nusra Front.

Between the southern area and Raqqa province appears the knot of Deir-ez-Zor, where battles are ongoing between regime forces with Russian air cover and ISIS. Some American officials want to speed up the isolation of Deir-ez-Zor to expel ISIS and the regime from it, while others see the possibility of accepting regime and Russian presence if an agreement is reached with Moscow, which is providing air cover to the regime forces and its military airports near the city. A Western official said: “Washington may accept the presence of Moscow and Damascus in Deir-ez-Zor, but it will not accept Tehran’s presence.” He said that the Americans had decided to defend the territory the opposition controls, but it will not at this time take regime areas.

The course of the battle on the ground indicates a contest to control territory and to strengthen positions on the Syrian field in parallel with military and political negotiations in Amman and Astana. The Russian army has broadened the area of its deployment to Suweida and Daraa’s outskirts and has begun to deploy its military police in the place of Iranian militias in the “reconciliation” areas. However, it is giving air support to regime forces and Hezbollah in their attempts to expell ISIS from eastern Aleppo, up to the western bank of the Euphrates, and is providing air cover for the advance from Palmyra to Deir-ez-Zor and Abu Kamal near the Iraqi border. This comes after the U.S. army took control of the Euphrates Dam and the Tabqa military air base and supported recovering the Baath Dam within the operation to liberate Raqqa, in addition to the continuing Western support for the FSA in Daraa to repulse regime attacks toward the Jordanian border.

The Trump administration believes that control through agreements and competition with the Kremlin on the southern zone and strengthening the military sites northeast of Syria will lead to a penetration of the “Shiite crescent” from Iran to Iraq and through Syria and Hezbollah to Lebanon, in addition to ending Tehran’s plan to provide a land support line to the Mediterranean and the possibility of realizing old ambitions of establishing a base. Indeed, the Trump administration believes that way the defeat of ISIS and reduction of Iranian influence can be done with the least economic and military cost.

Tehran has meanwhile intensified its support for the militias under its authority to mix up the American cards in the Syrian desert. It has not accepted the plans which have been drawn up by Washington in Syria, and is putting pressure on the U.S., which considers defeating ISIS in Mosul with the support of organizations loyal to Iran a priority as well. Indeed some of the militias have approached the Iraqi border and vow to cross to join the battle in Deir-ez-Zor or Raqqa.

In addition to that, Iran is pained to strengthen its grip on the ground between Damascus and the Lebanese border and the Damascus belt through military operations and demographic changes, in order to influence the political decision-making in the Syrian capital, regardless of the regime, and increase Moscow’s reliance on it in the midst of Russian-American negotiations at a time when Russia is still negotiating with Washington and seeking an understanding with Ankara and Tehran around the four “de-escalation” zones. There are those who put forward the possibility of a subsequent trade between the countries involved in Syria to define the borders of control and endorsing “zones of influence” until sitting at the quota table in the coming political system.