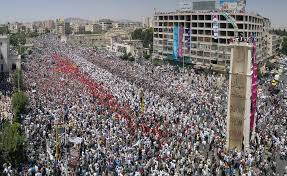 Trotsky described the Bolshevik revolution of 1917 as “the Revolution Betrayed”. This name could also accurately reflect the Syrian revolution, which began seven years ago with the dream of changing Syria from a country governed by a dictatorial, sectarian, corrupt regime to a country in which the principles of citizenship, justice and the rule of law prevail and fundamental freedoms are respected as an issue above the Constitution.

In Russia, the October 1917 Revolution achieved its victory over the Tsar and all those who stood in its wake, after a bitter civil war. The treachery that afflicted the revolution was from within it, from its leaders and cadres. In Syria, the treachery peaked both from inside and outside, which led to destruction and the deterioration and the unfortunate form that we see now.

The treachery of the Syrian revolution came from many conflicting parties that did not have anything in common.The treachery came from those who were supposed to be friends and supporters of the Syrian people. The first of these is the American administration, which under Democratic President Barack Obama and Republican Donald Trump, not only lacked a clear strategy on Syria, but also lacked any moral or humanitarian sense of the suffering of the millions of Syrians who lost loved ones, had their homes destroyed, lost their jobs and found themselves refugees or internally displaced people, dependent on food baskets or a charities that would bring artificial limbs to their children to replace those that were lost by bombing raids or under torture.

At the beginning of February 2011, Obama was clear with Egyptian President Hosni Mubarak, when he said, transition "must be meaningful, it must be peaceful and it must begin now", adding his famous phrase “now means now .”

In Syria, on the other hand, the American position was fluctuating according to the whims of a group of Obama’s aides who were afraid of the fall of Bashar al-Assad and its reflection on the region, but did not mind weakening the country. In July 2011, then US Ambassador to Syria Robert Ford visited Hama to see for himself that the revolution was peaceful and unarmed. In Hama the Syrians greeted him with rice and flowers, but when he returned to Damascus, he told his aides that al Qaeda was coming to Syria.

The Americans benefited from the Syrian Kurds fighting the Islamic State (ISIS). Once they completed their mission, however, the Americans abandoned them in Manbij, and they are now about to withdraw from the east of the Euphrates leaving the Kurds to their fate. In the south, the Americans found nothing wrong with telling the Syrians there that they should not count on Washington's support in countering an offensive by government forces to restore areas controlled by the opposition. "The US government wants to make it clear, that you should not assume or expect military intervention," said a letter leaked to the media.

Many of those who were frustrated by President Obama's stance were betting on President Donald Trump, but the latter's positions were by no means better than his predecessor. On the contrary, it was Trump who fired the mercy bullet at the Syrian revolution by abandoning southern Syria.

But the United States is not alone in failing the Syrians. Regional governments in turn played a major role in the treachery of the Syrian revolution by manipulating and attracting factions and fostering the most radical opposition factions and the failing to provide support to political factions and civil society organizations.

The most prominent manipulation was to force the Syrian opposition to change its political discourse at the Riyadh 2 conference, which led to a change in the leadership of the Syrian opposition, when it paved the way for accepting Bashar Assad's survival as a fait accompli that could not be bypassed.

However, all the causes of failure cannot be blamed on external factors. The Syrians themselves bear the bulk of the responsibility, and they – or some of them – are therefore involved in treachery. Perhaps the first participants are “us”, we who left the country in search of safety for us and our children. We gave the country up to the more extreme Syrians and immigrants who came from all parts of the globe to turn Syria into a fascist Islamic state.

The political opposition also played a negative role by competing among factions and leaders, their quarrels and divisions, and their response to regional and international pressure to take positions contrary to the interest of the Syrians. The opposition leaders saw nothing wrong with anyone counting on this government or that, and they did not care about being portrayed as regional proxies, rather than leaders of the Syrians in general.

Moreover, the opposition failed to attract all the Syrian religious and sectarian communities of the nation. Instead, the sectarian discourse rose, without the opposition trying to read, condemn or expose it.

As for the armed factions, they were busy acquiring more territory and fighting each other more than fighting the regime, Hezbollah, and the Iranian militias. The faction leaders have been preoccupied with increasing sources of funding, accumulating wealth and working in illegal fields such as smuggling, arms trafficking, kidnapping and human trafficking to boost their wealth. In contrast, the honorable faction leaders were killed, often by their comrades, as was the case with Colonel Abou Furat, for example.

I have repeatedly said that in general the revolution is evil, but an inevitable evil. It is an evil path to getting rid of greater evil. However, I would like to imagine that our revolution was one of the noblest and cleanest of revolutions, before the treachery began to hurt it. The treachery started with “us” Syrians and then extended to those sitting in government offices all over the world.