At a meeting with the Director of Operations at World Food Program, Faisal Mikdad has called for greater efforts to secure aid for Syrians in need writes SANA. 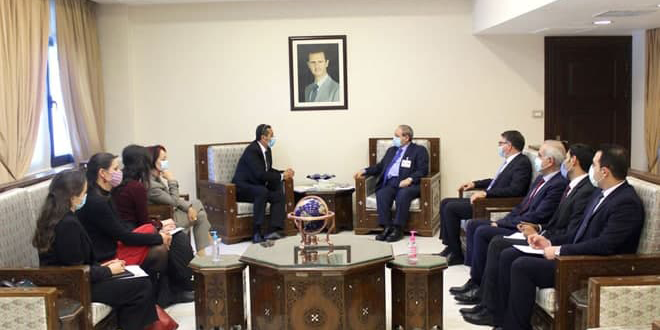 The two sides reviewed the existing joint cooperation between the Syrian government and the WFP.

Mikdad expressed appreciation for the efforts made by the WFP in Syria in delivering humanitarian aid and highlighted the need to deliver it to those who deserve it, in a way that alleviates the economic challenges, which the Syrian people are facing as a result of the destruction, caused by the terrorist gangs, to the Syrian economic infrastructure and the unilateral coercive measures imposed by some Western countries on the Syrian people.

He highlighted the need for the WFP to redouble its efforts to implement the decisions of United Nations bodies related to facing the challenges of the novel coronavirus and the Western economic siege on Syria.

For his part, Daoudi praised the facilities provided by the Syrian Government to the WFP for the success of its humanitarian mission and highlighted the cooperation and coordination between the two parties.

He stated that the WFP seeks to help the Syrian people in the greatest way that alleviates their suffering.