Regime artillery has targeted a number of towns and villages in Idleb, killing and injuring civilians reports Enab Baladi. 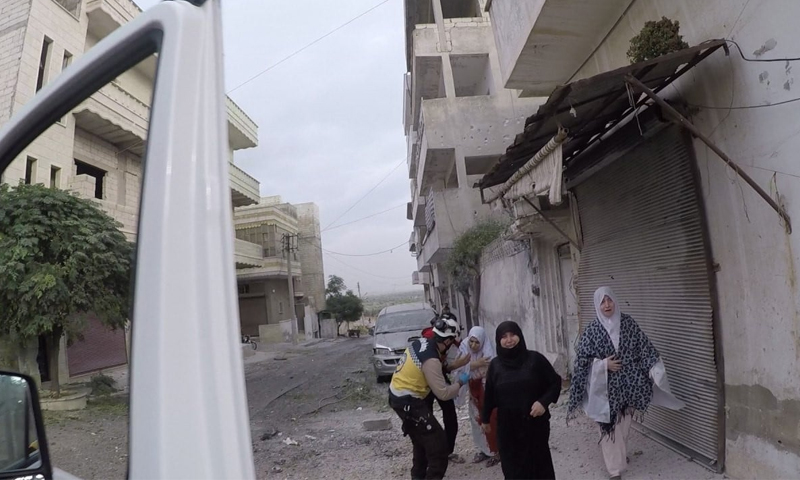 According to what the media office of the Syrian Civil Defense (White Helmets) told Enab Baladi on Wednesday, seven civilians were killed, including four children, and 17 civilians, including a child and six women, who were wounded due to intense artillery shelling by the regime forces that targeted several cities and villages in Idleb Governorate.

The Civil Defense published videos of rescue operations and wounded people being evacuated.

A civilian was wounded, as a result of a similar operation on the town of Ehsim in Jabal al-Zawiya, south of Idleb.

The regime forces also intensified their bombardment on the villages and towns of Mareian, Balshoun, Shanan, Deir Sunbul, al-Bara, and Balshoon in Jabal al-Zawiya.

More than 20 shells targeted the neighborhoods of the city of Idleb, killing a child and wounding eight civilians, including two women. Operations focused on the Sheikh Talet neighborhood, the industrial zone, the secondary school, and Salah al-Din School.

Two children were killed in the town of Kafraya, northeast of Idleb, when the regime forces shelled civilian homes in the village. The regime also struck the city of Binnish and the town of al-Fu’ah, east of Idleb.

Civil Defence teams were targeted by the regime forces while carrying out evacuation and relief operations in the city of Idleb.

A spokesperson for Hay’at Tahrir al-Sham, Abu Khaled al-Shami, said in a statement that artillery and missile shelling by Tahrir al-Sham targeted regime sites, in response to the bombing of civilians in opposition-held areas.

According to Shami, a Russian officer, members and officers of the 25th Division, known as Tiger Forces, were killed, while others were wounded.