President Assad has met with a Russian delegation to discuss the upcoming refugee conference to be held in Damascus and the efforts made by foreign countries to prevent it writes SANA. 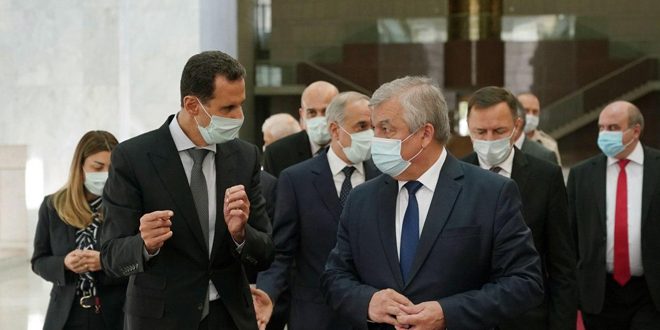 On Thursday, President Bashar al-Assad received a Russian delegation from the Defense and Foreign Ministries headed by the Russian President’s Special Envoy to Syria, Alexander Lavrentiev.

Talks during the meeting dealt with the upcoming international refugees conference, scheduled to be held in Damascus next November, and the efforts made by both sides for the conference to have positive results, which contribute to alleviating the suffering of Syrian refugees and allow them to return to their homeland and their normal life, especially in light of what has been achieved in terms of restoring security and stability to most of Syria.

The challenges facing the conference, especially the attempts of some countries to either prevent it, abort it, or to exert pressure on countries willing to participate in it, were also reviewed during the meeting.

There was an agreement that these countries continue to politicize the humanitarian file, which reveals their true face before global public opinion.

Both sides stressed that these countries will not succeed in their endeavors since the aim of the conference is purely humanitarian and in the interest of refugees and their return to their homeland and provides humanitarian support that guarantees adequate conditions for that.

The members of Russian delegation briefed Assad on the results of their tour to a number of countries in the region that host a large number of Syrian refugees.

They affirmed Russia’s determination to continue joint action with the relevant Syrian institutions to help close this humanitarian file.

Assad thanked Russia for its support and efforts to make the conference a success.