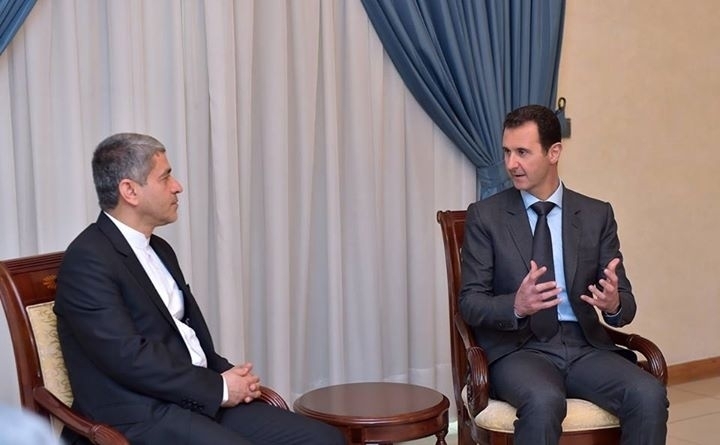 President Bashar al-Assad met with the Iranian Minister of Economy and Finance Ali Tayebnia and an accompanying delegation on Monday.

President Assad stressed during the meeting that the economy is one of the examples of foreign aggression waged against Syria, represented through a blockade imposed on the Syrian people and destruction of the country’s infrastructure. The president noted that support provided by friendly countries, notably Iran, had great effect over boosting the steadfastness of the Syrian people.

President Assad referred to the importance of continuous strategic relations on an economic level between Syria and Iran, which serves the interests of the peoples of the two countries, stressing the need for clear structure and feasible mechanisms for bilateral economic cooperation.

The Iranian minister underlined that joint ties between Syria and Iran, in all areas, are broad and deeply-rooted and cannot be separated, expressing his country’s full readiness to transfer its experience in the fields of development, technology and engineering to Syria.

Tayebnia noted that his country believes that standing by Syria and its people is Iran’s duty, as Syria has always been major force in confronting Zionist schemes in the region, claiming that Syria’s victory in the terrorist war waged against it is a primary factor in regaining stability and security to the states of the region.

The meeting was attended by Finance Minister Ismael Ismael, Economy and Foreign Trade Minister Humam al-Jazaeri and ambassadors of the two countries.

Concluding the meeting, President Assad delivered a statement to Iranian TV, answering a question on the change of the stance of major states that had previously stated no solution could be achieved without the departure of President Assad. Assad said that whether he should stay or leave is an issue for the Syrian people to decide.

“In this regard, we have been listening to the Syrian people and observing their reactions and aspirations and everything that is related to the people. Whatever comes from outside was only words and bubbles that go away and disappear after a while. It is not important whether they say ‘he should go, or stay or leave’, whether they changed (their stance) or not. What is important is how the reality of the situation was going,” he said.

Regarding US Secretary of State John Kerry’s call for dialogue with President Assad, Assad said: “We still hear statements; we should wait for actions and decide accordingly”.

On a question about how President Assad views the prospects of the upcoming stage regarding the situation in Syria at a time when many Western countries have started communicating with the Syrian government, the president said, “First of all, regarding the situation in Syria, we do not have any choice but to defend our homeland. There have been no other choices since day one when it comes to this point.”

He added that any international changes that come within this framework are positive if they are sincere and practical, but all moves should start with halting political support to terrorists, stopping their funding and arming, and pressuring the European states and the counties affiliated to them in the region which provide logistic, financial, and military support to the terrorists, adding “only then we can say that this change has become real”.