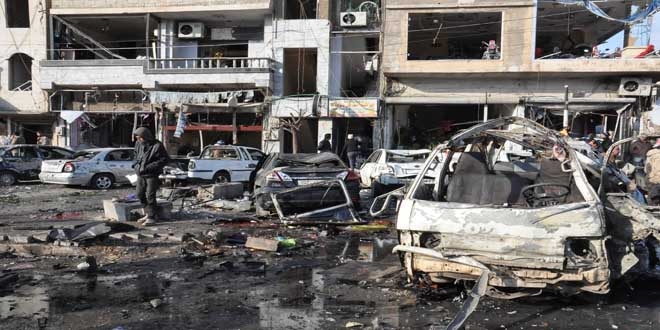 A total of 19 people were killed and many others injured in two terrorist attacks on the Zahraa neighborhood in Homs city on Tuesday.

The first attack was caused by a car bomb that targeted a security checkpoint in the 60 Street, which was followed by a suicide bombing, according to Homs Governor Talal al-Barazi.

The two attacks claimed the lives of 19 people and injured over 100 others, Barazi confirmed in a statement, noting that the death toll might climb as some of the injured are in a critical condition.

Barazi pointed out that there are civilians and members of the checkpoint among the dead.

Meanwhile, a reporter from the official Syrian news agency SANA mentioned that the two terrorist attacks caused massive damage to houses and infrastructure in the area.

The Islamic State group later claimed responsibility for the attacks in the Zahraa district.

Prime Minister Wael al-Halki said the attack was aimed at raising ISIS’ morale, especially after the victories achieved by the Syrian army over the terrorist organizations on different fronts.

On December 28, two similar terrorist attacks hit Zahraa, claiming the lives of 19 civilians and leaving 43 others with severe injuries.