Commander of the key Fatimid Brigade killed by opposition forces in Syria's coastal region, according to Iranian media 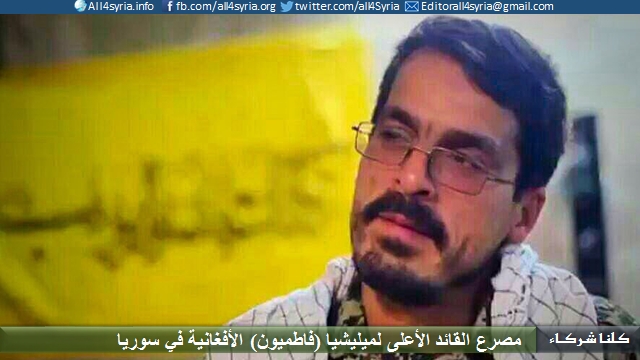 Iranian Nasr TV reported on Sunday the death of a high-level commander in Syria close to General Qasem Suleimani, the head of the Iranian Revolutionary Guard’s elite Quds Force.

The website said General Murtada Ataiyeh, one of Suleimani’s most important aides and the high commander of the Afghan Fatimid Brigade, which is fighting in Syria alongside the Assad regime, was killed.

The Fatimid Brigade is one of the largest military units fighting alongside regime forces in Syria, and is composed of Afghans known as Shiite Hazaras, most of them refugees who were living in Iran.

After the Syrian revolution erupted in 2011, the Revolutionary Guard worked on forming the unit from Afghan Shiites living in Iran to support regime forces against revolutionary brigades. But the central leadership of the Fatimid Brigade was hired by General Suleimani.

A number of Iranian media outlets leaked the location of Attaiyeh’s death, saying that the general was killed during fighting in Lattakia.

The fighters in the Afghan Fatimid Brigade number more than 25,000, according to sources, most of them recruited from Iran and distributed throughout most Syrian cities. Some areas and districts and camps in the Damascus countryside are completely under the brigade’s administration, and a number of its fighters’ families have been brought from Iran and settled in the Damascus countryside within a systematic settlement project which aims at demographic change in the Syrian capital.