Activist in Suweida have recorded the arrest of 10 people, amid large protests calling for the fall of the regime reports Baladi News. 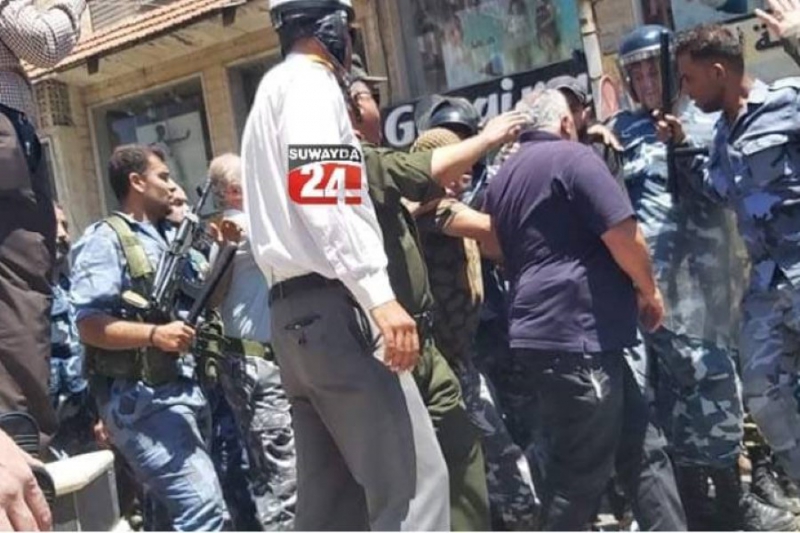 In a report released today, the Syrian Network for Human Rights said that the Syrian regime had forcibly disappeared 10 activists from the popular movement in Suweida, and that it had used repression in the face of their rightful demands. At least 2,172 people from Suweida governorate were detained or had been forcibly disappeared inside official and unofficial regime detention centers.

The five-page report considered Suweida, with its standing and way of life, to be different from other areas. The governorate, which is mostly inhabited by Druze, has seen protests against the Syrian regime since 2011, in addition to multiple sit-ins by lawyers and engineers.

The report turned towards the arrest of a large number of residents, most of whom became forcibly disappeared. Suweida has also remained under the complete control of the Syrian regime since 2011, and has not faced airstrikes, which is the main reason for the destruction of neighborhoods and cities elsewhere, and the displacement of those areas’ residents.

According to the report, the governorate of Suweida has paid a heavy price for political change. At least 2,172 residents remain in detention or forcibly disappeared within the regime’s official and unofficial detention centers from March 2011 to June 2020, according to the Network’s database. The group has also documented the killing of at least 37 people from Suweida due to torture in official and unoffcial regime detention centers.

The report also mentioned the recent demonstrations seen in Suweida city, where protesters raised slogans calling for the release of detainees, the fall of the Syrian regime and the start of a political transition process. The report also reviewed the ways in which the Syrian regime responded to these demonstrations with repression, arrest, torture and forced disappearances.

According to the report, activist Raed Abdi al-Khateeb was arrested on Jun. 9, 2020. On Jun. 15, 2020, Syrian regime security forces and loyalist militias attacked protesters in Suweida city after an anti-regime demonstration gathered in al-Seer Square. Nine civilians were arrested and taken to an unknown location. Among them were government employees who had earlier been arbitrarily fired from their jobs due to their positions on the Syrian regime.

The report noted that the arrests were not carried out through a legal arrest warrant issued by a court. None of the detainees’ family members were notified of the arrests, and the detainees’ mobile phones were taken from them as they were forbidden to call their relatives or lawyers. The report warned that they could face torture and face the same fate as 85 percent of detainees who are forcibly disappeared.

The report confirmed that the Syrian regime faced the new popular movement in Suweida with the same methods that it used in March 2011. This includes arbitrary arrest, torture, forced disappearance and threats in a manner that violates the most basic principles of international human rights law. According to the report, this confirms that the regime has not improved in any way after all that has happened in Syria. It is not accepting of any change towards respecting human rights and peaceful democratic change. Its only option was to win and claim a landslide victory to rule Syria for life.

The report called on the international community and the United Nations to protect civilians in Suweida from torture and forced disappearance, and to avoid a repetition of the failure to protect Syrian civilians as happened since March 2011. It also recommended sending a clear message of support towards the demands of basic rights that the protesters called for, and it advocated the need to pressure the Syrian regime and its allies—especially Russia—to immediately free and reveal the fate of the 10 forcibly disappeared people. A specific timetable would need to be set for that transfer. This would contribute to alleviating the suffering of Syrians, as well as their safe and voluntary return.

The report demanded that the Syrian regime stop terrorizing Syrian citizens and violating the Syrian constitution and international human rights law, especially regarding forced disappearance and torture. It also called on the regime to allow the freedom to protest and express opinions, and to stop counter-demonstrations of government officials under pressure and coercion, as well as release detainees from Suweida and all other governorates, and stop using detainees as a hostage and bargaining chips.