The new US sanctions on Syria penalises any person or company that assists the Assad regime or contributes to the country's reconstruction, putting Syria in a state of near-complete isolation writes Al-Araby Al-Jadeed. 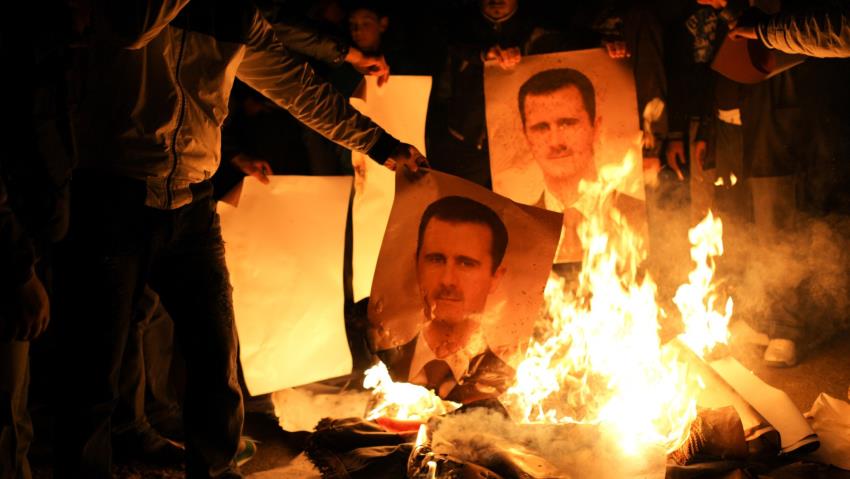 New US sanctions on Syria are set to come into force on Wednesday, as Washington looks to tighten the screw against Bashar al-Assad and deal a further blow to the collapsing Syrian economy already battered by a decade of war.

The Caesar Syria Civilian Protect Act of 2019, dubbed the Caesar Act, will sanction the Assad regime in a bid to “halt the wholesale slaughter of the Syrian people, encourage a negotiated political settlement and hold Syrian human rights abusers accountable for their crimes”, according to the authors of the bill, which passed in the US Senate late last year.

The act was named after a former Syrian military photographer, known today only by the pseudonym ‘Caesar’, who fled Syria in 2014 with over 54,000 harrowing pictures of the victims of torture, brutality and starvation in Assad’s jails.

The images gained notoriety and were widely used to publicise accounts of the brutality of the Syrian regime, with many later displayed at the US Holocaust Museum and at the United Nations.

Following long campaigns by members of the Syrian opposition abroad, they lent their name to the ‘Caesar Act’, passed by both Democrats and Republicans in the US Senate.

Ibrahim Olabi, a lawyer at Guernica 37 Chambers and founder of the Syrian Legal Development Programme, an organisation that works on sanctions, commended the effort put to pass the law.

“It would not have been possible without the incredible efforts of the Syrian Americans who lobbied for holding human rights abusers in Syria to account,” he told The New Arab.

“Of course, the defector Caesar and his bravery in exposing the tens of thousands of photos of people who died under torture in regime cells played a huge role in pushing this forward.”

The act, which passed as part of a major US defence spending bill, penalises any person or company that assists the Assad regime or contributes to the country’s reconstruction, putting Syria in a state of near-complete isolation.

It will target individuals and businesses anywhere in the world who operate either directly or indirectly in Syria’s economy.

The law sanctions specific sectors in Syria, including oil and natural gas, military aircraft, construction and engineering. It will also give US President Donald Trump wide powers to freeze assets of any individual dealing with Syria, regardless of their nationality.

Foreign investors, particularly firms in the region, will no longer be able to pursue business opportunities in the reconstruction and tourism sectors in Syria.

The act will also likely affect Washington’s regional allies, such as the UAE, who have previously sent business delegations to Syria and are believed to be operating in the country.

Although the act will exempt imports of essential food and humanitarian items from sanctions, it nonetheless adds an extra layer of scrutiny to aid sent by the UN or other NGOs to ensure it does not benefit the Assad regime.

While the Caesar Act sends a clear message that the US government seeks to close Syria for business, it remains unclear how it will be enforced or monitored.

The Act itself does not call for Assad’s departure or that his regime engages in a UN-led political peace process. However, stipulations included specify a number of criteria for the Assad regime to meet before the US sanctions are lifted:

Olabi says: “It is important to note that it is very positive that the act includes the criteria of what the regime needs to stop the sanctions.

“They are all premise-rooted in human rights grounds. What the regime needs to do is engage in a process that allows for a democratic Syria, where perpetrators of international crimes are held to account.”

After nearly a decade of war, the Caesar Act comes as the Syrian economy already faces multiple crises. The cumulation of years-long Western sanctions, government corruption and infighting, a pandemic and an economic downslide worsened by the financial crisis in neighbouring Lebanon, has brought major inflation and renewed protests even in regime controlled areas.

Experts predict that the new law will be a heavy blow to the country, where eight out of 10 people make less than $100 a month, according to the UN. It will likely see contracts cancelled and businesses turning away to avoid sanctions.

“It is not yet clear what the effect will be,” Olabi says. “On the one hand, the act puts pressure on the regime and its abuses. It also codifies, in law, the abuses of the regime, making it difficult to ignore.

“On the other, the regime controls directly or through its cronies many of the economic powers in Syria, and so if they are targeted, so will be the people. It is akin to a human shield.”

“The US needs to ensure that it does what it can to target those responsible, mitigating the impact on civilians.”

How are these sanctions different?

Syria has already been targeted by US and EU sanctions, which have seen state assets as well as those of hundreds of businesses and individuals frozen.

Washington already bans export and investment in Syria by Americans. However, the new law targets for the first time Russian and Iranian entities connected to the Syrian regime.

“These new measures go much wider than previous sanctions regimes on Assad,” Julien Barnes-Dacey, director of the Middle East and North Africa programme at the European Council on Foreign Relations, tells The New Arab.

“But critically they also aim to block economic inflows from other countries in a bid to keep the country isolated.

“Any businesses or individuals looking to engage in Syria risk being targeted by US extraterritorial sanctions, which is likely to have a hugely chilling impact on people’s willingness to even contemplate doing business in Syria even if legitimately allowed,” Barnes-Dacey says.

“These new measures will clearly impact the regime’s economic base, severely restricting its access to financial resources. But the regime is likely to be able to lean on its networks of control to ensure its continued access to key resources needed to survive, channelling much of the pain onto the wider population.

“Ultimately these measures could serve to worsen the country’s already dramatically deteriorating social economic conditions at quite a grave cost for the Syrian people.”

The first wave of sanctions will be imposed on 17 June, with three other stages expected to follow by the end of August.

The Assad regime has condemned the Caesar Act, saying the United States will “bear main responsibility for the suffering of the Syrian people”.

Assad ruthlessly crushed protests that erupted in 2011 in demand of reforms. The country has since descended into a civil war that has killed more than 380,000 people and has displaced millions.