The Syrian pound has been hit by a series of economic tremors that have resulted in a historic fall in the value of the pound against the dollar writes Al-Araby Al-Jadeed. 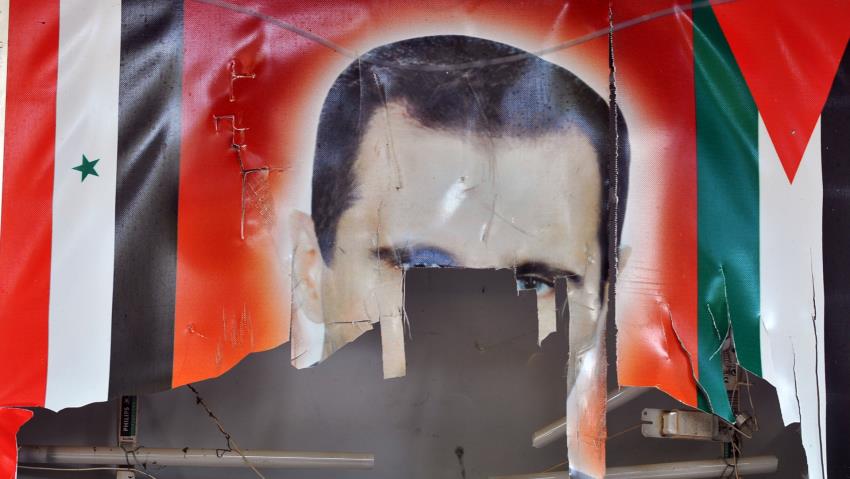 The Syrian pound has taken a battering over the past nine years, much like the country as a whole. At the start of 2011, the Syrian pound stood steady, as it had for many years, at a rate of around 50 pounds to the US dollar.

It saw a steady decline before having its downward trend turbo-charged in the second half of 2019, reaching a record-breaking low of 2,000 pounds to the dollar in the middle of May 2020.

The recent dramatic collapse of the Syrian pound happened on what is sometimes, and rather euphemistically, referred to as the ‘parallel markets’, what most people would recognise as a black market.

In fact, Syria has a number of different exchange rates. There is the black market rate, but also, the official rates set by the Central Bank of Syria.

“When you have a lot of people rushing to buy dollars, and selling their own currency, the value of your currency declines. One of the consequences of a currency that declines is that imports become very expensive,” Jihad Yazigi, an economist and the founder of The Syria Report, told The New Arab.

In an attempt to prevent prices from rising and being forced to spend more on imports, the regime retains the ‘official rate’ even if that doesn’t reflect the demand that is pushing up the value on the street. Thus, creating multiple rates.

“In 2011, when the uprising began, the dollar was between 47 and 50 pounds. Last year, it was 600. So the value of the dollar had already multiplied by 12. That was a consequence of the massive destruction caused to the economy and the fact that the economy doesn’t export anymore, or it exports very little. So it doesn’t generate a lot of foreign currency revenues. Tourists don’t come anymore, which is also another lost source of foreign currency,” says Yazigi.

But how did it get from 600 pounds last year, to the grim milestone of 2,000 just a few weeks ago? It was the compounding effects of multiple events crashing into each other, and then into the currency.

Despite fears of a spill over from Syria affecting neighbouring Lebanon, it was conversely the collapse of the Lebanese pound that plunged Syria deeper into its economic quagmire.

Rising Lebanese debts and a lack of financial ability to pay off these debts, with a seeming absence of political will to find a solution, led to capital controls being imposed. Throughout the war in Syria, Lebanon had been used by Syrians as a reliable place to withdraw dollars.

“Syrians, who bought a lot of their dollars in Lebanon, suddenly couldn’t access dollars, the value of the Syrian pound started to collapse. In June 2019, the dollar was worth 600 pounds. By December it became 800,” says Yazigi.

Less than two weeks later, the Syrian pound was reported as being traded for 1,000 pounds to the dollar. The economic collapse in Lebanon was a heavy blow to the Syrian pound, but just the first in what would be a triptych of economic misery.

Rami Makhlouf, a Syrian tycoon and cousin of President Bashar al-Assad, has been one of the most prominent backers of the regime, aiding them financially and providing support with militias that he funded, in addition to facilities and services.

Makhlouf’s seeming untouchability came to a head when reports emerged that the regime was demanding he pay vast sums of money to the government or face repercussions – demands that Makhlouf refused in a series of pleading videos posted on Facebook.

When the regime moved against Makhlouf, it sent a shudder down the spine of the Syrian elite. “The big currency traders are based in Damascus, and are close to the regime…The Makhlouf affair reflects tensions within the regime and is not a source of reassurance or tranquillity,” Yazigi says.

For those big currency traders, the message from the regime was clear: no-one is invincible. The worry of those traders was reflected back on the currency, which suffered another fall. By the beginning of May, the Syrian pound reached 1,400 pounds to the dollar.

The final chapter in this economic nightmare was an experience that has been shared with the rest of the world. Covid-19 and the effects of countries, including Syria, putting large sections of their economies on ice has been monumental. While the internal effects of a lockdown were bad for Syrians, the fall in remittances added insult to injury.

The World Bank reported that 1.6 billion dollars of remittances flow into Syria every year, and for many families they serve as a vital lifeline. Without these remittances, the little buying power that they had shrivelled to almost nothing.

And it is worth remembering that this hit came after remittances had already seen a massive devaluation when the central bank announced a new exchange rate of 1,260 pounds.

For Jihad Yazigi, these three points on the timeline are the ménage à terrible that twisted the knife in an already injured Syrian pound. “The decline of the past nine months, starting in July until today, besides the already underlying factors, these are three main factors. First of all, and mainly, the Lebanese banking crisis, Covid-19, and more recently, the Makhlouf affair.”

There are options available to Syria, but these range from the unlikely to the highly improbable. “The only option is to change your economic and financial policies to bring back dollars into the market…But of course, this is not where we are heading today,” explains Yazigi.

An influx of dollars could come in the form of reconstruction funds. The final price tag on reconstructing Syria varies. In a 2017 letter to the UN Security Council, former Special Envoy to Syria Staffan de Mistura said that “reconstruction will cost at least 250 billion US dollars,” while Assad in 2018 estimated a bill of $400 billion. Another 2018 study from Harvard suggested that the number could run as high as $1 trillion.

As the main backers of the regime, Russia and Iran are likely contenders for reaping the rewards of reconstruction, but with both countries suffering from their own financial difficulties, neither has the economic power to see the job through.

Both the US and the EU have said they would fund reconstruction, but with strict conditions; and the main stumbling block of those conditions being a political solution to the crisis and the removal of Assad.

If Syria did manage to secure reconstruction funds, one consequence would be the restoration of the tourism industry, which in turn would bring dollars back into the country and have a stabilising effect.

Neighbouring Lebanon is seeking help from the IMF, an option that Syria, as a contributor, could utilise. But IMF loans come with conditions, conditions that Syria, nor its Iranian or Russian partners, would accept. These conditions would follow a similar path as those set by Western reconstruction funds: a political solution.

In the short term, Syria can be helped by the easing of coronavirus related lockdown restrictions that have prevented Syrians living and working abroad from earning money. A return of remittances would see a trickle of money return to the country and put a plaster on severe haemorrhaging.

Faced with this crisis, the Syrian regime are trying to boost fortunes. “The government is trying to promote a policy of what we call import replacement, in other words, it’s trying to encourage Syrian companies to invest in the production of a lot of items that are currently imported. Food items and chemicals,” Yazigi explains.

“If you reduce the imports you can spend fewer dollars on imports and encourage exports to Iraq, Egypt, Africa and Europe. So that would generate dollars too. But of course, the impact of these measures will still be very small, compared to the needs of the economy.”

The other factor that could turn around the Syrian pound, in a much more prominent way, is a resolution to the Lebanese banking crisis. “If the IMF and the government agreed to a deal in the next few months, you could you would see an easing of tensions on the currency market. You’d probably see the Lebanese pound regaining some level. Maybe the bank would relax the withdrawal restrictions on dollars. So that would also allow Syrians to withdraw dollars,” says Yazigi.

Syria is a country of hope, but only by the virtue that things couldn’t get much worse. A recent report by the World Food Programme said that 9.3 million people in Syria are now “food insecure.”

Without a meaningful political solution on the horizon, a stable currency and an increase in the spending power of Syrians could be a small respite and a path to secure some sense of stability and prosperity for themselves and future generations.