The Syrian government has created anger and concern with their decision to implement the smart card scheme for bread, with people worried it will be the end of subsidies writes Asharq Al-Awsat. 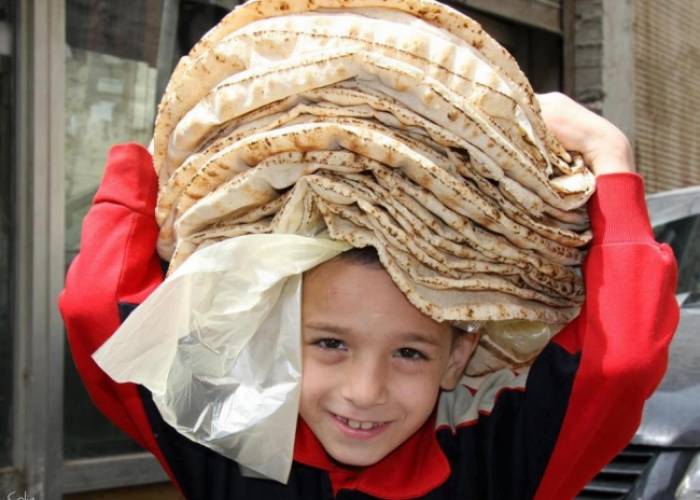 The Syrian government insists on distributing subsidized bread to citizens using the “smart card” despite poverty and the spread of the novel coronavirus.

Some citizens saw the decision as an act of treason, saying that it crosses the red lines set by the ruling Baath Party, while experts said this might be a first step towards removing the subsidy on bread, just as had happened with other commodities, when the government has failed to provide the basic needs for people.

The scenes of crowded bakeries that were witnessed in Damascus at the beginning of the war is back after more than nine years. Then, people wanted to secure subsidized bread, paying fifty pounds for eight loaves of bread. This started to happen all over again at the beginning of 2020, and it became worse under the precautionary measures against COVID-19, announced by the government in March.

To make things worse, bakeries also announced they were shutting their doors during their usual working hours due to a shortage of flour, which it receives from the government.

Amid this situation, the government has repeatedly hinted that it will adopt the “smart card” option as a tool to control the distribution of goods for citizens after the idea was deemed to be a success in its first trial with mayors and neighborhood committees.

The government said it aims to “rationalize consumption” and, “to prevent the trading of bread or converting it into fodder, which used to happen to 40 percent of the bread that was baked before” noting that this distribution process caused traffic, a scene similar to what used to happen in bakeries.

A bundle of subsidized bread was being sold for more than 600 Syrian pounds on the black market, noting that one US dollar is equivalent to 1,250 Syrian pounds.

The government’s suggestions were met with rejection, which went viral on social media platforms and some even called on President Bashar al-Assad to intervene and halt the measure in light of the failed and bitter experience the citizens went through when they used the smart card to obtain materials like gas and fuel and basic supplies like sugar, rice, vegetable oil, and tea.

Although the government announced that each family is entitled to one gas tank every 23 days, many families stressed that they did not receive any fuel, despite waiting for 75 days.

Many main household providers spend an entire day outside government institutions to receive sugar, rice, vegetable oil and tea, although they might not receive them on the same day and if they do, it would be lacking several materials.

Minister of Internal Trade and Consumer Protection Atef Naddaf said during a conference held on Monday that the government will continue with implementing the new method.

Several websites and Facebook pages reported him saying that the implementation of the card system would kick off on Wednesday, noting that, “within four days, the consumption of bread already decreased by distributing it through authorized agents”, in reference to the mayors and neighborhood committees, while the bread is distributed once every 2-3 days in certain neighborhoods as a result of poor collection methods and transportation.

Louay, a citizen like the majority of other citizens who were waiting for Naddaf’s statement, said to Asharq Al-Awsat, “The government betrayed the people and now it’s challenging them with their loaf of bread, an essential material which they cannot live without.”

Speaking to Asharq Al-Awsat, a female teacher said, “People are deprived of a single piece of Falafel and even from an egg, and yet, the government is working to make people dream about receiving a loaf of bread!”

“They are crossing and stepping on every red line they said they would never come near, from gas to fuel and goods supplies,” she added.

Economists, who requested anonymity, told Asharq Al-Awsat that, “the government’s decision did not come to rationalize consumption but came as a result of a shortage in flour, just like other living necessities that the government is incapable of securing amid the sanctions imposed on Syria, worsened by paralysis in freight traffic due to the coronavirus pandemic.”

One of these experts point to the possibility that this decision will be a prelude to lifting the subsidy for bread supplies definitively.

He highlighted similar scenarios that have occurred regarding previously subsidized commodities such as gas, gasoline and fuel oil, as those materials were cut off and then became available in small quantities at high prices, to become even more expensive than they are in the international market, noting that the price of some goods in the Syrian markets is now three-times higher than those in international markets.

A kilogram of sugar in the international market is available for less than 20 cents, which equals 220 Syrian pounds, while in the Syrian market it’s being sold for 600 Syrian pounds.

Speculations concerning the government’s intention to lift support for bread were reinforced by news on certain websites citing an official in Damascus as saying that the government is considering raising the prices of “tourist bread”, cookies, and “samun” (pita-like bread)- noting that the new prices will be issued next week.

The official said this comes in light of “the significant increase in production cost,” noting that the previous prices were issued when the price of flour was 150 Syrian pounds, while today its more than 350 Syrian pounds, in addition to the high prices of oil and food enhancers.