Since Russia began its involvement in Syria, Sergey Shoygu has made many trips and has served as an important point of contact between Assad and Putin writes Alsouria Net. 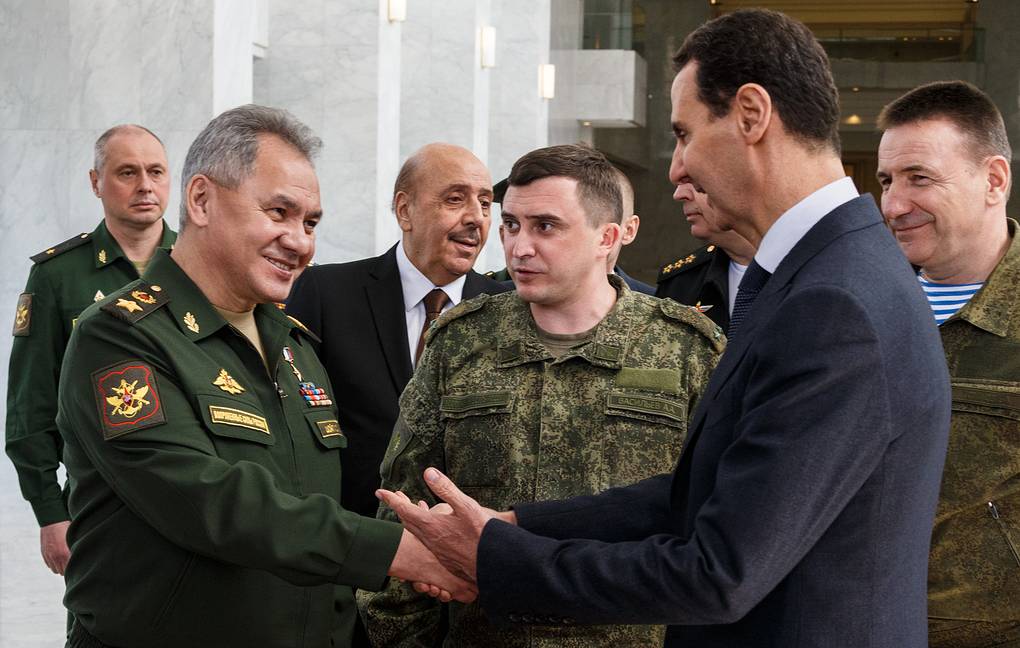 On Jun. 18, 2016, less than a year after the Russian intervention in Syria to support the Assad regime, a Russian military plane landed at the Hemeimeem base in the Lattakia countryside carrying the Russian Defense Minister, Sergey Shoygu. At that time, he met Bashar al-Assad after he was summoned to the base on an unannounced visit, which was the first by a high-ranking Russian military official since the Syrian revolution started in 2011.

The ministry confirmed that Shoygu visited Syria under the direction of Russian President Vladimir Putin to inspect Russian forces in Syria.

The visit came amid special circumstances, after American lawmakers called on former US President Barack Obama to carry out a military airstrike against the Assad regime, and after Moscow on Jun. 17, 2016, warned, through the spokesman for the Russian President, Dmitry Peskov, that the Middle East would be thrown into “chaos” if Bashar al-Assad was toppled.

Shoygu’s first visit to Syria was followed by several similar visits, accompanied by the intensification of the military escalation by Russian forces on the ground—from southern Syria, to the eastern regions, and then Idleb in the northwest of Syria.

Sometimes in military uniform and in diplomatic dress at others, Shoygu met Assad on his frequent visits. While the Russian Defense Ministry announced that the meetings were business visits, the official Assad regime media has said that Shoygu’s main mission is conveying Putin’s messages to Assad with regards to events in Syria, whether on the military or political level.

For example, almost a year after his first visit, in September 2017, the Russian Defense Ministry announced that Shoygu had visited Syria and held talks with Assad, noting that the visit, “came at the request of Russian President Vladimir Putin. The two sides discussed the issue of stabilizing the situation in Syria, work in the de-escalation areas, providing aid to the population, and military cooperation.”

Shoygu’s visits to Syria over the past five years have not come during stable conditions, but have coincided with radical and sensitive changes, both politically and militarily—perhaps the most prominent of which was in March 2019 during the military campaign against Idleb and the accompanying political moves to start the Syrian Constitutional Committee. In his last visit on Mar. 23, 2020, he met Assad and discussed, “military cooperation and combating terrorist organizations, in addition to reviving Syria’s economic capacities,” according to a statement by the Russian Defense Ministry.

Since its military intervention in Syria, Russia has completely broken the rules of protocol for the Assad regime. Unlike with other countries and governments internationally, Russian officials suddenly land in Syria from time to time—which is what Shoygu and Russian President Vladimir Putin did during their visits, whether to Hemeimeem or the capital Damascus.

The Assad regime has not hid the nature of the Russian visits. Bashar al-Assad referred to this in his speech during his meeting with Putin and Shoygu. During Shoygu’s first visit after the Russian intervention, Russian media published a video recording that showed the moment Assad received the Russian Minister of Defense, expressing his happiness at the meeting, adding that it is a “pleasant surprise.”

The video also showed, at the time, part of the meeting, in which Assad said, addressing Shoygu, “I did not know that you would come personally.”

Shoygu is described by Russian media as a minister who does not wear a tie and does not carry a briefcase, but, “carries enormous amounts of life experience and leads operations from the ground, where the greatest danger is, and not from his Moscow office.”

In October 2015, the French newspaper Le Monde published a report on Shoygu, in which he said that he was leading Russian operations in Syria, and that he was Putin’s right-hand man, and the most prominent candidate for his succession, given that he masterminded the process of annexing Crimea, where he himself supervised military operations—as well as the media campaign, managing to win the support of the Russian people for this operation.