Ghaith al-Matar has taken it upon himself to repair the road in his village, so that he and all the other children in his village can go to school writes Zaman Al Wasl. 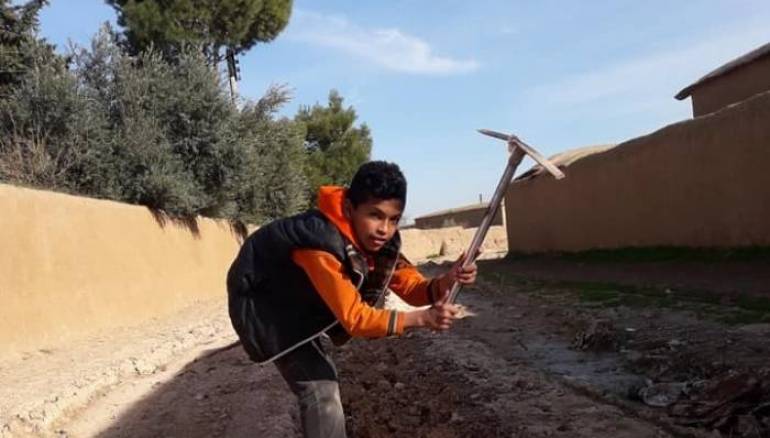 Despite his limited physical strength, Ghaith is determined to finish the rehabilitation of the road from his home, in the small village of Sadiyya in northeastern Hassakeh province, to his school,  since the municipalities and organizations have been unable to do a thing.

Rainfall deepens the suffering of the residents of the village of Saadiya, including students, as it obstructs the road to the school, sometimes for days at a time.

The road has been ignored by the local municipalities and relief organizations.

Ghaith al-Matar, 13, a seventh-grade student, is trying, with the improving weather, to develop the roads accessibility, so that he and 70 other students can travel from their homes, and the homes of their relatives, to the school.

Although he lived all his life in these difficult circumstances in this poor region, he and his four brothers, who attend the same school, excel in their studies.

Ghaith is determined to continue working and finish his education to help his father, who is frequently very tired from his work building mud houses for little remittance, ranging from 15,000 to 25,000 Syrian pounds per room. His father’s income is the only income that the family has.

Once he has completed his studies, Ghaith hopes to become a teacher in Saadiya School, so that he might teach the children there, and give them and their remote village a brighter future.

When the school day ends, instead of playing football, which Ghaith loves to do, he spends his time fixing the road, a task which his family supports.

Saadiya School, near the town of Tel Hamis, has around 150 students, most of whom travel on foot using the muddy road in winter, a story that is repeated in the vast majority of the villages in Hassakeh province.

According to official figures, the number of students enrolled in Hassakeh reached 104,000 at the beginning of the current academic year.