The situation in Syria has pushed Syrian families into financial hardship forcing them to change their consumption and shopping habits reports Asharq al-Awsat. 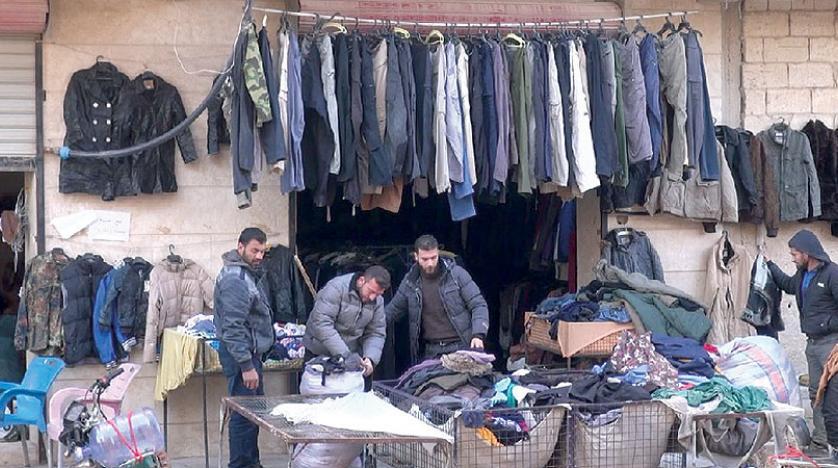 The drop of Syrians’ purchasing power, amid the ongoing war and hyperinflation, has forced them to change their consumption and shopping habits. One prominent change is the emergence of the trade and purchase of used clothes, which Syrians call “baleh”. The second-hand stores have become widespread in liberated areas in northern Syria, providing an alternative to expensive new clothes.

In the blistering cold, Mahmoud and his family head to the used clothes market in al-Dana in northern Syria to buy winter clothes. The story of the 27-year-old who works in garage repairing cars and earns between 50,000 and 60,000 Syrian pounds – the equivalent of around 50 dollars – is typical.

He says that his salary is not enough to meet his and his family’s needs. Since they fled from their home in Homs around two years ago, they have been living in a camp near al-Dana in northern Idlib.

“Every season, I go to second-hand stores to buy clothes for me and the children. Now, I am buying wool jackets, winter coats and winter shoes. I bought three coats for the children for 3,000 Syrian pounds. If they were new, they would have cost at least 20,000 pounds, which I cannot afford. However, the coats that I just bought are actually of better quality,” he told Asharq Al-Awsat.

Abou Mohammed, known to many in the field, is a used clothes merchant. “I import second-hand European clothes and shoes, through the Turkish border crossing with Turkey,” he said. “They come in the form of compact bales that vary in weight and quality. They weigh 250, 100 or 50 kilograms. Some of them include different types of clothes, with a mix of clothing for children, women and men, while others contain a specific type.”

“Each of them has a different price, and we sell them in bulk to retailers. They either buy them for 50 or 60 pounds per kilogram, or they buy a whole bale, the price of which ranges between 50 to 100 dollars, depending on the type and its weight.”

Melhem al-Omar, the owner of a second-hand clothing store tells us that “after sorting the goods and putting them on display, we start selling them to customers either item by item, or in kilos, the price of which is never above 1,500 Syrian pounds.”

“Cotton clothes are most commonly sold per kilo, which gets the customer about 10 items of clothing,” he said. “We lose money often in the bale trade”.

He also notes that he sometimes receives un-wearable clothes in his shipments, which he sells to people who burn them to keep warm. This inevitably means that their prices are very low, with a kilo costing less than 50 pounds.

Samer Al-Hassan, the owner of a new clothes store in Idlib, says: “I can barely sell an item or two per day and at very small margin of profit, sometimes no profit at all.”

“Citizens go to thrift shops due to their poor finances,” he lamented. “More than three months ago, I started thinking about selling second-hand clothes instead to preserve my capital, which has started to decline because I rely on it to pay my expenses, and make a profit.”