During the course of the war, the Syrian middle class has shrunk, which one Syrian economist blames on the major disparities and inequality in income distribution writes Al-Watan. 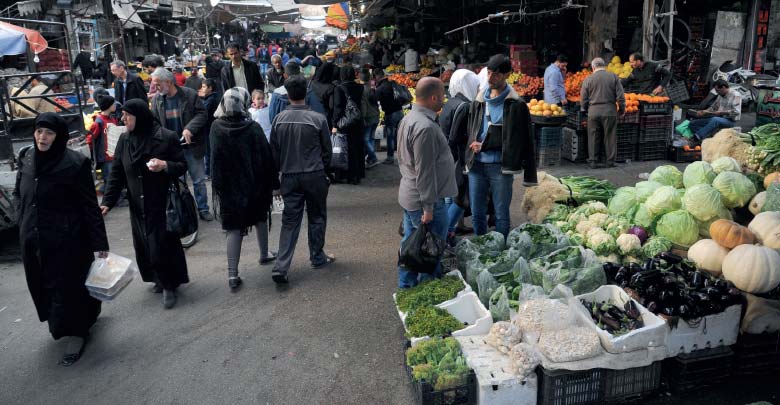 A professor of economics at Damascus University, Raslan Khadour, said in a study published by the Damascus Center for Research and Studies, that the major disparities and inequality in income distribution are one of the most important reasons that citizens are losing trust in one another and the government, and are a major obstacle to economic growth.

The study, which was titled, “The Problem of Wealth and Income Distribution: A Challenge Facing the Syrian Economy,” said that a path to rebuilding trust would be equity in distribution. It noted that the war, the blockade and harsh unilateral measures had increased poverty rates and caused a decline in the size of the Syrian middle class. But the war was not the only cause—rather, the problem lies in distribution and how available resources are used.

The war and its consequences, as well as economic policies before the war, led to increasingly severe disparities and a decline of collected taxes to record levels, due to tax evasion and the proliferation of the shadow economy. Those with salaries and wages are now bearing a higher tax burden than compared with other forms of income, and the share of salaries and wages as a portion of national income has declined to reach within 20 percent, which is a very low ratio.

The severe polarization in distribution has led to a decline in the size and the role of the middle class, specifically during the war years. The data has shown that the major disparity in the distribution of wealth and income played an important role in the lack of social and political stability.

He said that the prosperity of Syrian society depended primarily on the level of wage workers’ income, because wage workers comprise the vast majority of individuals in Syrian society, at 67 percent. Therefore developing this income should be a fundamental contribution of economic policies in the coming years.

Khadour noted that average salaries and wages in the government and private sector were around 40,000 to 45,000 Syrian pounds per month, with the average in the private sector between 65,000 and 70,000 pounds per month. He said that there had been a terrible decline in the real incomes of salary and wage earners since 2011 compared with the real increase in property income and real profits. The rate of wage workers out of the total workers is 66.5 percent, business owners is 3.7 percent, and self-employed is 29.8 percent—that is, wage workers are the great majority of those upon whom the purchase of produced goods and services depends.

Wages in the public business sector (government institutions of an economic character) are around four percent on average of total current expenditure items, and this rate in the private business sector is around just 10 percent.

Increasing wages could lead to an increase in costs, and therefore an increase in prices—that is true. But wages currently comprise only 20 percent of the costs of goods and services at the highest estimate. The price of any product does not only include wages, and therefore even if wages increased 50 percent, this would mean that prices might only rise 10 percent. This means that the surplus would remain with wage workers to spend on goods and services, and this increase in spending would invigorate the production process and might create new jobs and increase development rates.

The size of the shadow economy in Syria, on average, before the war, was around 19.2 percent of gross domestic product from 1999 to 2007, according to a study by the World Bank published in 2010. However, this has reached record levels during the war, although it is difficult to estimate it, especially in light of the war.

Khadour tried to estimate the shadow economy’s size in 2016 through a simplified method based on one indicator, tax evasion, taking into account the estimated size of the Syrian economy this year and the difference between what should have been paid in taxes and what was actually paid in taxes that year. This showed that the size of the shadow economy was about 78 percent of the Syrian economy in 2016.