"It’s impossible to keep addressing the West with emotions, and interpreting reality in a wishful way, and thinking that the West will give support and aid to the right side" 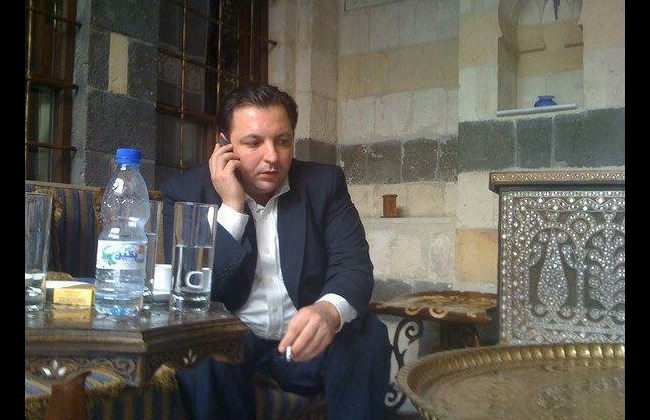 In the Friday, May 6, episode of “Haki Suri” (Syrian Talk) from the international news conference in Finland, presenter Lina al-Shawaf hosted the journalist and rights activist, and head of the Syrian Center for Media and Freedom of Expression, Mazen Darwish.

Darwish, who won the Pinter International Writer of Courage Award in 2014 and the UNESCO/Guillermo Cano World Press Freedom Award in 2015, was detained by the Syrian authorities a number of times for his political and rights activities, with his most recent arrest lasting from February 2012 to August 2015.

In the interview, Darwish denied the Syrian revolution was just part of a trend that arrived to Syria or an imitation (of the Arab Spring movement), but was instead connected to people’s lives under the rule of a repressive and corrupt regime, and their yearning for life and liberty.

“Anyone who was close to Syrian society could see the extent of their zeal and need for change,” he said, “The start of the revolution did not happen overnight but was the result of cumulative work and efforts and sacrifices by many Syrians, all to make Syria a greater candidate for revolution than others.”

Darwish blamed the Syrian regime for pushing the revolution’s course over the past five years toward violence and sectarianism, saying: “In the beginning there was no sectarian alignment in this blatant and brutal way, which I saw after I got out of prison. The participants in the uprising came from different segments of Syrian society, and those who came out against the uprising did too.”

Darwish continued: “The Syrian regime’s nature is sectarian, which caused it to invest in it (sectarianism) as it would invest in anything, like the Palestinian issue, and it employed its power to the extent that it could to make the revolution sectarian, especially with what it did in al-Bayda and Banias. Despite that, reactions remained sporadic and limited and the uprising had a national character, demanding and dreaming of dignity and freedom for all.”

He added: “The revolution entered the armed phase, which deepened the fissures, and things took a sectarian turn, because the authorities from the beginning knew that it would lose in a battle of values, ideas, principles, freedoms and national interests, and knew that they had no hope when confronted with the street, and so they systematically pushed things toward violence and sectarianism, which was carried out in a studied and methodical fashion, and planned for with forethought and pragmatism, one day after another.”

The Latest Arrest and the Opposition’s Political Performance

Regarding his latest incarceration, Darwish said that it was his sixth arrest over 15 years, and that it had been expected. But he had not expected it would be in this form, saying that: “In the 90s, torture was used to extract information and had a functional goal. But after the revolution it took on an organized role, aiming to push people toward violence and taking up arms. Then it became hysteria, an end in itself, aiming to provoke killing and revenge.”

He added: “I saw torture before the revolution and was subjected to it. But I was not expecting to see things like the leaked Caesar photos, even though I was previously held in the al-Mezzeh airport and the Fourth Division, and even though my parents were also previously imprisoned.”

Darwish refused to respond to claims that he enjoyed “special treatment” during his previous detention, saying: “There is a level that it is better not to descend to.”

However, regarding the accusations of defending minorities before the special session of the United Nations Human Rights Council in New York, Darwish said: “What I said is available and clearly recorded. This accusation was organized by specific people for reasons which are known and which I’d prefer not to go into. What I care about is that every figure and Syrian whose opinion matters to me has increased their respect for me, and so I have no problem with these accusations.”

On the current situation in Syria, and the political performance of the opposition, the activist said: “The problem lies in that there is a political mindset that cannot let go of the political tools it has been using for five years, despite the failures they’ve led to.”

“It’s impossible to keep addressing the West with emotions, and interpreting reality in a wishful way, and thinking that the West will give support and aid to the right side. It’s not Santa Claus. It has political interests. The West is concerned with three basic issues: Stopping the flow of refugees, eliminating ISIS, and protecting minorities.”

Darwish said the political discourse the opposition needs to make the West listen is that “fighting ISIS needs Syrian society united against it, and requires leadership that serves society and steers it in this direction. This regime is unable to do that. So it must be removed, changed, and held to account.”

“Likewise, the problem of the refugees the West is suffering from will not be solved by building walls and barriers and signing agreements with Turkey to prevent them from coming. It’s not possible to solve this by dealing with the results rather than the causes that created the refugees. All this means a need for a convincing political discourse.”