The Euphrates basin area is witnessing a rebel campaign against the regime on one side and the Islamic State on the other, as ISIS stages a last-ditch effort to defend its eastern stronghold 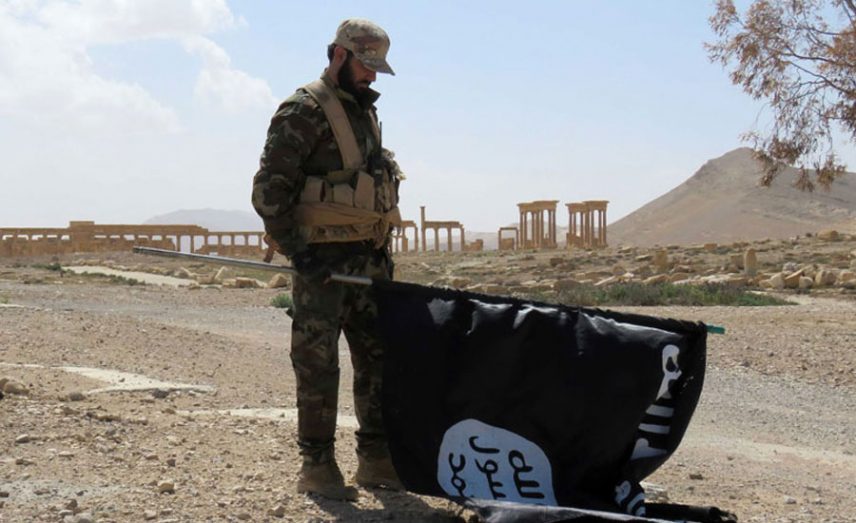 Events on the ground in the the province of Deir-ez-Zor are accelerating, with a military race to complete the cordoning of President Bashar al-Assad’s forces and allied militias on one side and the Free Syrian Army groups which recently entered from the northern side of the province on the other, in a move aimed at controlling the general situation.

These military developments coincide with the “de-escalation” zone agreements between Russia and Syrian opposition factions in a number of provinces and cities, most recently the northern Homs countryside, which has moved the military focus toward fighting the Islamic State (ISIS).

Considering its zone of control, ISIS has nothing but Deir-ez-Zor province, both the countryside and city, with its continuation in the area unlikely to exceed several months. The dispersal of the group’s military capabilities in battles in every area it controls, and an increase of the pace of flight of a number of commanders and fighters under its authorities — especially locals — have accelerated its forthcoming demise.

Assad’s pliers near the province entrance

Assad’s forces and militias are advancing on three military axes with Russian air support to reach the province, after achieving a major expansion in recent days in the Aleppo and Homs countrysides.

The first axis starts from the southern Raqqa countryside, and through this it has advanced across broad areas. In the first week of August, regime forces took more than 20 villages along the line of Syrian Democratic Forces’ control in the area of Raqqa city, up to the Euphrates River on the outskirts of the province’s administrative border.

The area of its control is about 30 kilometers from the Euphrates River, amid continuous withdrawals by ISIS militants, whose own announcements were limited to the killing of dozens of Assad fighters.

The second axis focuses on the eastern Homs countryside which is one of the most important military axes opened along the lines it lies along. Assad’s forces reached the outskirts of the strategic city of Al-Sukhna and imposed a cordon around it from three directions (west, southwest and southeast) and are trying to impose a full siege from the eastern direction.

The third axis starts from the eastern Hama countryside, where military tactics are moving slowly because of ISIS' “desperation,” with its forces recovering at the start of August a number of strategic points they had forfeited in the area.

According to military analyst Baraa al-Taha, Assad’s operations in the coming days will focus on the two primary axes — the western and the southern ones. The former starts from Rajm Suleiman toward Manjem al-Malh, in order to first take control over the group of hills extending from the provincial border up to the city of Deir-ez-Zor and east to the military air base. This is in addition to Majem al-Malh, a strategic location whose capture will reduce the current unjustified losses and bring down a chain of cities and villages in the western countryside.

The second (southern) axis is the Al-Sukhnah axis, which is expected to meet the western axis at Al-Shoula in order to cut off any connection between ISIS' forces to the east in Deir-ez-Zor and to the west in the Aqairabat pocket and on the Al-Salamiyah borders.

Coinciding with the creep of Assad’s forces, negotiations have come to the forefront between the Revolutionary Commando Army faction and representatives of the U.S.-led international coalition to form a “national army” based in Al-Shaddadah in the Hassakeh countryside.

The Commando leader, Muthanna Tala, said that the political bureau in the army was negotiating with the Americans in order to form a “national army.” No statement has been issued in this respect by the international coalition.

Talk surrounding the formation of a national army comes after negotiations to establish a military base at Al-Shaddadah were hampered, against a backdrop of coordinating with and depending on the SDF, in mid-July.

Regarding the formation of the army, Tala told Enab Baladi that it would “include national forces whose nucleus is the Revolutionary Commandos.” He added that “the coalition is asking for full popular support for the political bureau, from the villages on the ground and the legal figures in the eastern area.”

According to the Tala, “Riad Hijab [the general coordinator for the High Negotiations Committee] and others are speaking in the name of the Revolutionary Commando Army.”

The Revolutionary Commandos will move to Shaded (which is controlled by the Syrian Democratic Forces) and form a force there, according to Tala, saying that “the army will be the sole entity authorized to enter Deir-ez-Zor and liberate it from ISIS.”

The commander added that negotiations were proceeding “positively,” indicating a rejection of acting with the SDF and “the pressure on the Americans to form an army which can subsequently change its name.”

According to Enab Baladi’s information, the faction’s fighters’ transport to the area, if agreed with the coalition, will be by air toward Al-Shaddadah, chosen because it is about 90 kilometers north of Deir-ez-Zor.

Within hours of the announcement of negotiations with the U.S.-led coalition, the FSA in Deir-ez-Zor — which draws most of is fighters from the city — had formed a temporary committee to determine the best direction, militarily and geographically, to launch an advance to take control over the province.

In a joint statement obtained by Enab Baladi on Saturday, the FSA said it had “taken a decision to form a council to determine the ideal front to head toward Deir-ez-Zor, with all human, material, and media energies directed toward this front.”

The Lions of the East Army and the Revolutionary Commandos signed this statement, as well as Ahrar al-Sharqiya and the Jaish al-Sharqiya, and said that “the committee is the core of communication with all elements of the province in order to reach a joint, unified operation.”

The work of most Deir-ez-Zor groups is currently focused on the Syrian desert, and they are entering into daily military battles with Assad’s forces and allied militias on one side and ISIS on the other.

According to the statement, “the council met and decided to choose the southern front in the desert as the most appropriate front to enter Deir-ez-Zor and to liberate it at this stage.”

According to the view of Taha, the military analyst, the areas south of the Euphrates up to the city of Deir-ez-Zor in whole will go to Assad’s forces and his backers, while the areas to the north will be divided between forces backed by America (the SDF and the Revolutionary Commandos).

Among the most important points which distinguish the provincial city is its geographical position, which is concentrated on the western bank of the Euphrates and considered a connection between Iraq and other Syrian provinces.

The eastern gate to Syrian territory, the control of which Assad’s forces see as insurance of control of the Iraqi-Syrian border, is the most dangerous in terms of security.

The Euphrates divides it into two parts, the first from the left side extending to the Syrian desert, and the second to the Syrian Jazira region. Deir-ez-Zor is the second biggest Syrian province after Homs province and its total area is about 33,000 square kilometers, that is, about 17 percent of Syria’s total area.

An important “fulcrum” in the east

The Deir-ez-Zor military air base is located near the city, which has been under siege from all sides by the Islamic State group in previous months.

The air base, which is under Assad’s authority, is considered one of the biggest strategic military points which enjoys a vital position among the areas under ISIS control in the eastern region, especially between the Iraqi city of Ramadi and Raqqa.

Its importance lies in that it is the one which connects the province with other Syrian cities, and it is used to transport fighters and ammunition to other bases in the province.

The city of Deir-ez-Zor is considered the most prominent stronghold of the ISIS after Raqqa city, where the last thorn has been broken after the broad advance of the SDF there.

Over the last few days, after Iraqi forces took control over the city of Mosul, it has turned into the most important storehouse for the ISIS’ fighters. Analysts say that they have turned it into the “new capital of the caliphate,” after Raqqa and Iraq’s Mosul.