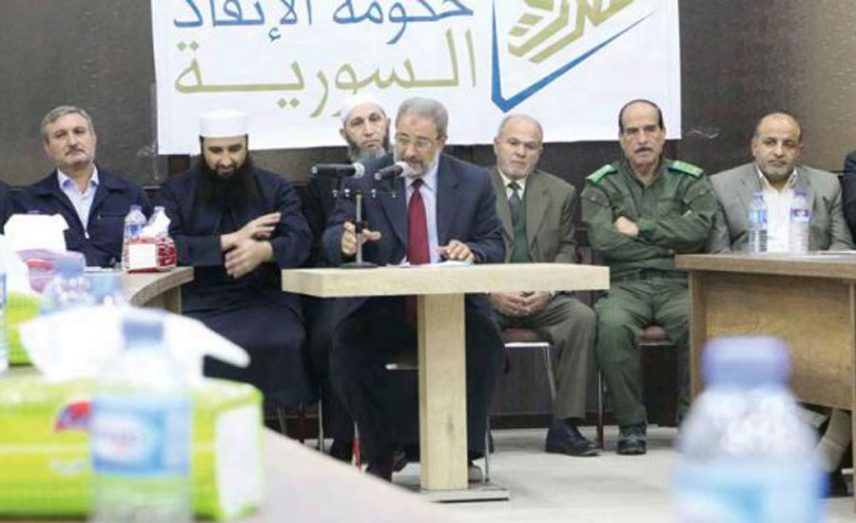 According to its presidency, the heads of the government’s ministries were selected in an effort to “save issues that have been suspended in the region for seven years.”

From the Bab al-Hawa border area with Turkey, the formation of the “government” was announced after open and closed meetings were headed by Mohamad al-Sheikh around the formation of a “political entity” following a conference held in August.

A number of questions have emerged around the government’s fate in light of the complications which the region is witnessing, including international interventions and bickering over the Hay’at Tahrir al-Sham’s (HTS) indirect control over the government’s workings.

Enab Baladi spoke with Sheikh, who was named prime minister of the “government” and who said that he had met with the “foundational authority” and proposed a working program with the names of the ministers and their CVs.

According to Sheikh, work begins directly after the government’s formation “because the Syrian people are waiting for what we will put forward in the coming days,” hoping that what it will offer will reduce suffering.

Sheikh described the new body as a “competent government,” saying that “we chose the most qualified minister for each portfolio in terms of academics and skills out of 200 CVs we discussed for three weeks.”

The interior minister, General Ahmed Nouri Mohamad Deeb, from Idleb, is a law graduate who defected from the regime in 2012 after holding the post of head of riot police in Aleppo.

The Justice Ministry will be run by Ibrahim Mohamad Shashou, born in Aleppo, who has a doctorate in Fiqh (Islamic jurisprudence) and previously worked with the Shariah authority in Aleppo. Shashou is currently the faculty dean of Shariah and law at Idleb University.

The Ministry of Religious Endowments, Dawa and Guidance will be headed by Anas Mohamad Bashir al-Moussa, from Hama, who has a degree in Shariah and was president of the Appeals Court in the Jaish al-Fatah (Army of Conquest).

Dr. Jumaa al-Omar from Idleb, who will take the portfolio of higher education, has a doctorate in biotechnology and nutrition, and was previously a teacher in the veterinary college in Hama. He currently teaches at Idleb University.

The Education Ministry will be run by Mohamad Jamal Shahoud, from Idleb, who holds a degree in Arabic language and a master’s in administration, and previously worked as deputy education minister in the Syrian interim government.

The Health Ministry will be headed by Dr. Ahmed Ibrahim al-Jarak, from Idleb, who holds a master’s degree in medicine with a specialty in general surgery. He has worked in the health directorate in Idleb since its establishment in 2014, and currently heads the board for general surgery in the health specialties authority under the Health Ministry in the interim government.

The Agriculture Ministry is headed by Fayez Ahmed al-Khalif, from Idleb, who holds a doctorate in agriculture.

The economy portfolio is led by Abdel Salam al-Khalaf, from Idleb, who has a degree in economics and works as an inspector in the central authority for monitoring and inspection in Idleb, which is indirectly under the authority of Hay’at Tahrir al-Sham.

The Social and Migrant Affairs Ministry is headed by Mohamad Ammar from Damascus, who holds a degree in dentistry and a diploma of administration and coordination of civil society organizations.

The housing and reconstruction portfolio is run by Yasser Ghassan al-Najjar, from Idleb, who has a master’s degree in civil engineering and currently teaches at the Idleb University.

The Local Administration and Services Ministry will be headed by Fadel Abdel Qader Taleb, from Idleb, who has a degree in civil engineering.

Many of those in Idleb whom Enab Baladi spoke with criticized the ministerial choices and the formation of the “government” without elections, saying that it was “imposed on them.”

A member of the founding authority and founder of the Free Syrian Army, Riad al-Asaad, attended the “government” formation and said that it would administer the area “correctly in terms of military and services, since the two issues are intertwined.”