The recent announcement of the creation of an elections commission has been the final straw for some, who have long felt the failures of the Syrian National Coalition writes Al-Araby Al-Jadeed. 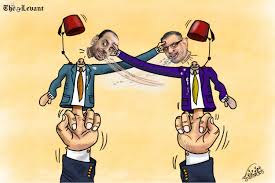 The decision to establish an elections commission, signed by Nasr al-Hariri, comes a few months after the wave of popular anger against the Syrian National Coalition (SNC), and appears to be the straw that broke the camel’s back and to settle the controversy among many of the SNC’s supporters who had bet, in previous periods, on the possibility of reforming it.

Despite all of this, there was hope that some SNC members would take the initiative to get back on the right track, until the election battle between Hariri and Anas al-Abada eroded every possibility of reform.

What happened in the Syrian regime’s People’s Council elections in July was no more provocative to the Syrians than what happened in an institution that is supposed to represent the legitimacy of their dream of establishing a democratic state and ending the tyranny of the repressive apparatus within it. However, they realized that they fell under the shadow of an institution that represents them against their will, to be the first opposition, perhaps in history, to represent a people who did not participate in the selection of its members, people who do not share its goals and are unable to hold it accountable for its actions.

By establishing the elections commission, the SNC represents the will of the state that benefits from the coalition’s existence, despite the will of all Syrians. This means that the return is rewarding for the SNC’s own people and serves the interests of the state that pushed the SNC to pass this decision in order to share power with the regime. This is met with popular anger of their decisions, at a time when the representatives of the opposition ensure that this disapproval from the general population of Syrians, according to the classification of the regime, does not carry any legal or executive power to exclude them or replace them with bodies elected by the people to represent their will. This is the reality of the opposition bodies, with a time-stamped difference, which is that the opposition draws its power from the countries that sponsor it, until these countries achieve their interests, in the current war of power liquidations that allies and parties in conflict are involved in, in Syria.

The SNC, which may have not have realised that it will not exist when there is a justification for elections in which the opposition participates, is misleading the people of the revolution that the decision is the implementation of the Geneva Declaration, which, in fact, did not mention such a commission, because the governing body on which the declaration relied is the one concerned with such decisions. The existence of the transitional governing body basically ends the existence of the SNC and even with the international circumvention vis-à-vis the Geneva Declaration, we are faced with a deception based on lies, signed by a president who came with a barter agreement to exercise a distorted power to emulate Assad’s authority that equips him with geographical and realistic tools and a group of loyalists whose existence cannot be denied. This comes at a time when the SNC speaks in the name of an audience that rejects and raises in its face the slogan “the coalition does not represent me.”

The last resort for the revolutionaries is to seek assistance from Russia and its ally, the Syrian regime, to prevent the SNC from representing their revolution, in a strange and unique paradox, in which Assad protects the opposition masses who revolted against his rule from the leaders of opposition institutions who are usurping their right to choose their representatives by refusing to coordinate with them for the upcoming elections and keeping the state of hostility between the opposition and its leadership as it was in the first place before the institutions that usurped their right to be represented were born and did exactly what the regime’s institutions did, but in a more daring fashion that does not take their dignity into account.

The regime’s allies are no longer the only ones accused of preparing a conspiracy to end the revolution and the dreams that the revolutionaries paid dearly to achieve. The slogan “the coalition does not represent me” that has been taking social media by storm reveals what the Syrians think of the SNC and goes to show that the decision to establish an elections commission has put an end to the revolution’s relationship with the SNC, a relationship that did not exist in the first place, which the SNC’s leaders should have worked at fostering instead of destroying.