It is looking hopeful that progress will be made in Geneva, but the obstacles in the way are many and varied writes Al-Watan 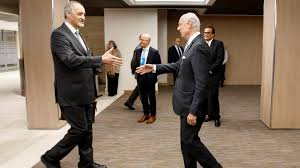 Once again the issue of Syria has returned to Geneva, enlivening its cold halls with the heat of action after reports that a formula has crystallized, which includes the formation of a committee that will discuss the issue of the constitution.

A few days ago the United Nations Special Envoy for Syria Staffan de Mistura, said that there were “real points of intersection to achieve progress on the political track called for by the Security Council in decision 2254 to arrive at a Syrian process led by Syrians and facilitated by the UN.” However, he was keen to lower expectations of a “material breakthrough” in the immediate future. The large volume of obstacles and problems which face the formation of the council, its competencies and mechanisms requires political consensus that has still not been provided and does not seem likely in the coming stage.

The opposition ranks are witnessing a clear division in selecting the share allocated to them. Participants in the Sochi conference are insisting on their full share without any detraction in a clear rejection to the idea of reinserting the High Negotiations Council at the forefront of the opposition scene after it refused to participate in Sochi.

The second problem facing the formation of the council is the Special Envoy’s insistence upon selecting the members of the so-called civil society himself, something rejected by Damascus and its allies, especially after the explicit and clear accusations against the Special Envoy’s lack of integrity and him straying outside the context of the talks. De Mistura’s evasions has been read by Damascus as a Western attempt to achieve the political goals they have been unable to achieve militarily.

The third problem which faces the meeting in Geneva is the number of members. Damascus, with tacit Russian backing, does not agree that their representation should be equal to the rest, especially given that its presence, influence, and positioning on the ground is headed in its favor, and at a rate of over 84 percent.

Meanwhile, the method of voting also presents a real obstacle and technical problem, with various options put forward. The Syrian government supports the method of voting unanimously after obtaining representation commensurate with its real weight, while the opposition insists on voting by majority.

The participation of the Kurds presents another problem in the formation of the constitutional committee, first of all due to the position of Turkey, and if the Turkish veto is overcome, the question of the extent of their participation and under what classification they will participate.

The biggest challenge at the Geneva meeting and the following meetings lies in the possibility of thawing the ice between the two international poles, amid a hardening of the American position — which still insists on its demands of a political transition, a full Iranian withdrawal from Syria and linking reconstruction to the political process — and the Russians who support Damascus’s view in terms of fighting terrorism and embarking on a political process beginning with amending the constitution and not overturning it.

Overall, it can be said that the political scene will see various bellwethers in light of the lack of international and regional will to resolve the Syrian crisis. The issue of the constitutional committee’s formation and operations will be one of these bellwethers. However, despite all the challenges, it will be a new political victory for Damascus and its allies because in the end it has pushed Washington to accept one of the outcomes of Sochi, which it had categorically rejected.