During his time in the Ministry of Finanace, Mamoun Hamdan oversaw the seizures of assets belonging to tens of thousands of people. 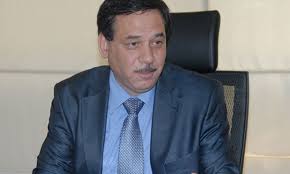 In 2016, Mamoun Hamdan was moved from the study halls of the accounting department at the College of Economics in Damascus to the corridors of the Finance Ministry, and was appointed to the top position by Bashar al-Assad. Since then, the number of Syrians whose wealth has been seized by the regime on charges of “terrorism” has risen, growing into the tens of thousands. The positions to which Hamdan has been appointed in Syria indicates the extent of Assad’s faith in him. During 2016, Assad issued decrees to appoint Hamdan as Syria’s top representative in five international institutions, and assigned him the task of representing Syria at a number of international financial institutions, including the International Monetary Fund.

Hamdan was born in Damascus in 1958. He studied economics and accounting at Damascus University, and completed his specialization in Germany, where he obtained a doctorate in 1989. He became a legally certified accountant and a member of the Chartered Accountants Association and a member of the Arab Society of Certified Public Accountants. He occupied the position of Director of the Technical Institute of Accounting and Finance in Damascus from 2005 to 2008, and then served as Executive Director of the Damascus Securities Market after 2011. He remained a faculty member at the College of Economics from 1989 until 2016.

Minister of Blocking and Freezing Assets

It seems that Hamdan was in charge of implementing the regime’s policy of revenge against Syrian opposition members. During his tenure, the Finance Ministry ordered the seizure of assets belonging to thousands of opponents of the Assad regime. According to statistics issued by the Finance Ministry, during 2017 alone the Ministry seized the movable and immovable assets of 40,000 Syrians. This was an increase of 10,000 from the previous year. The Ministry’s ready excuse was the “involvement in terrorist acts.”

The Finance Ministry periodically issues new lists , indicating which Syrians will have their movable and immovable assets seized by the government. Some of the decisions include entire families, and also include the precautionary seizures from Syrians who have left their homes and fled outside Syria under charges of “funding terrorist operations.”

The decisions issued by Hamdan, with photos of them published, show coordination between his Ministry and the Terrorism Court, to which Syrian opposition members are referred. The court is a mixed court, composed of both civilians and the military. Since its establishment in 2012 until the end of May 2015, the number of cases which it considered was close to 35,000, with only about 700 rulings issued, which were either prison sentences or the death penalty.

Hamdan had a role in the formation of a group which the regime called a “system for precautionary seizure indications,” which began work on Feb. 5, 2018, and carried out its work in coordination with the Justice Ministry and Finance Ministry.

Commenting on this system, Hamdan said on that date — according to the Finance Ministry website — that, “decisions for precautionary seizures issued by the Finance Ministry comprises a major portion of the documents, given that they are the biggest issue of circulars at the government level, and therefore implementing the system will increase the efficiency of seizures, through the immediate access to all concerned agencies and easing searches, in addition to reducing waste and achieving speed in circulars, preventing manipulation, and collecting the rights of the state and citizens.”

The people whose possessions were seized includes Syrian businessman Imad Ghrywati, the former President of the Syrian Chamber of Commerce. The decision included 11 members of his family, including the mother of the Ghrywati siblings, Sabria al-Samman, and five children of Zuhair Ghrywati. Imad, the oldest and most famous; Essam; Hanan; Bashar; Mohamed; as well as Imad Ghrywati’s wife, Bushra al-Albi, and four of their children: Nour, Zuhair, Faysal, and Hamza. The last one was not yet 18. The decision did not note the main reason for the seizure of these assets. Imad has lived in Dubai for several years after leaving Syria, when he resigned as President of the Chamber of Commerce and the Damascus Chamber of Industry in 2012. The Ghrywati family is considered one of the biggest and oldest capital owners in Syria, and owns a large group of companies and car showrooms.

Hamdan’s statements triggered criticisms against him by Syrians on social media. During an address in parliament in December 2017, Hamdan denied that there was a single starving person in Syria, which triggered protests by some MPs in parliament.

At the time, Hamdan continued by saying: “Sometimes someone feels hungry. I’m often hungry. I don’t have time to eat.” He added, repeating the phrase, “In Syria, no one is starving.”