Qadri Jamil, a Syrian politician who had very little influence in the Syrian political scene before the revolution, has been appointed Deputy Prime Minister in the current government to please Russia 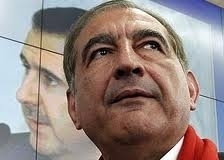 Qadri Jamil, a Syrian politician who had very little influence in the Syrian political scene before the revolution, has been appointed Deputy Prime Minister in the current government and Minister of Internal Trade and Consumer Protection. He is considered by many as the Russian horse inside Syria. Jamil is the leader of the People’s Will Party and the co-chair of the Popular Front for Change and Liberation. He is considered one of the strongest supporters of President Bashar al-Assad; still, he wants to participate in the Geneva conference as a part of the opposition. During a visit to Russia on August 21, 2012, Jamil said that President Assad's resignation might be considered if the opposition agreed to negotiate a peaceful settlement to the Syrian revolution.

Qadri Jamil is the son of Jamil Pasha, a Syrian businessman who was a close ally of the Syrian Communist Party and the former Soviet Union. He was rewarded by being the agent of Techno-Export, the official Soviet export agency. Jamil, albeit inheriting his father’s wealth, declined his family name because it has an aristocratic connotation (Pasha is a noble title).

Jamil graduated from Moscow State University with a degree in Science and Economics. He was an active member of the Syrian Communist Party under the party’s historic dictator, Khaled Bakdash, and had strong relations with him. When Bakdash died however, Jamil was sidelined by the dictator’s wife and son, who consecutively inherited the father. Jamil consequently split from the party and formed a small group of communists under the name of the National Committee of the Syrian Communists. His newspaper Qassiyoun (unlicensed) was read by Syrians for its criticism of the government’s economic performance. Although his party was not licensed, the government tolerated it and when Syrian opposition activists were in prison, Jamil and his supporters were free to work and talk. However, unlike the two other communist factions, the Jamil communists were not part of the National Progressive Front which brought together the governing Ba'ath Party and the other legal parties. As a result, his candidates to the parliament elections ran for both the 2003 and 2007 elections but failed to win any seats.

When the revolution started in March 2011, Jamil’s supporters bashfullyattended demonstrations, but Jamil soon distanced himself once the protests started to call for the removal of President Assad. When Moscow was apparent in supporting the Assad regime, he moved to the government camp, applied for registration to his party and changed its name into “the People’s Will Party”.He visited Moscow several times during the uprising and tried to establish his place as an opposition group leader, but the Syrian rebels and their supporters rejected him and labeled him as a “regime puppet”.

Jamil was a member of the committee that drafted amendments to the Constitution of Syria in response to the 2011 Syrian uprising. The amendments, which rather strengthened the power of President Assad, were approved in the Syrian constitutional referendum in 2012 and allowed multiparty elections in Syria. Following the referendum, Jamil's party joined forces with the Syrian Social Nationalist Party, which had previously been a tolerated party under the National Progressive Front led by Assad's Ba'ath Party, to form the Popular Front for Change and Liberation (also known as the National Front for Change and Liberation or the Popular Front for Change and Democracy).

Rebels accuse Jamil of defusing the revolution momentum by compromising the “people’s legitimate demands”. They say that by playing the role of an opposition faction, while at the same time participating in the government, he undermines the opposition image.

Russia, according to the opposition, is helping Jamil play this role. It depicts Jamil and his comrade Ali Haidar as the “internal Syrian opposition, which is open for talks with the leadership of the National Coalition.”

In fact, it is in Moscow that Jamil warned that the president's resignation cannot be a pre-condition for talks.

“As far as [Assad’s] resignation goes, making the resignation itself a condition for holding dialogue means that you will never be able to reach this dialogue. But any problems can be discussed during negotiations. We are even ready to discuss this issue,” he said.