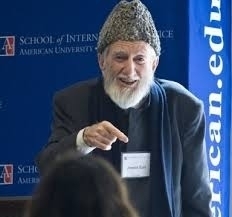 Jawdat Said is an influential cleric and an advocate of non-violence. He has had a great influence over demonstrators in many areas, including the now famous Daraya. When his words and statements rose in the banners of peaceful demonstrations that spread across Syria in the first year of the revolution, the influence of the respected sheikh was amplified, which worried the regime immensely. The young people found in the prominent non-violence advocate what they were looking for: a modern and moderate Islam that calls for democracy and civil rights more than it calls for rituals and prayers.

It seemed that the long years that Jawdat Said spent spreading the culture of non-violence and peaceful demonstrations have begun to yield tangible results. But the Revolution’s more recent trend toward militarization– pushed by the regime—has led to the decline of non-violence, and that mentality receives little attention any more.

Sheikh Jawdat Said a prominent sheikh who has adopted the doctrine of non-violence since the 1960s. He was born in 1931 and graduated from Al-Azhar in 1957. Said was arrested repeatedly because of his intellectual and religious attitudes. He is the founder of one of the most prominent forums that called for non-violence, democracy and human rights.

In the early 2000s, Said worked with a group of young people in Daraya, near Damascus, to create a civil society movement that focused solely upon the city's affairs, including, among others, issues of culture and sanitation. However, the regime was not tolerant of this move and arrested seven of the activists and sentenced them each to five years of prison.

In 2005, Said co-signed the renowned “Damascus Declaration,” which became the major umbrella of the Syrian opposition until the revolution in March 2011.

To illustrate his ideas on non-violence, Said “glorifies God's praise of Adam's first son, in the first murder humanity had ever known on earth, so that this first son of Adam becomes an example for us all to follow.”  Said would perplex many readers when he summarizes faith in Islam as "There shall be no compulsion in [acceptance of] the religion." He summarizes Islam itself as justice. For Said, Islam is “based on justice; whenever there is justice, God's Will is put into effect; whenever justice is near perfection, it becomes closer to God's legislation.” He adds that "when you judge between people, you [should] judge with justice.''

Said goes even one step further, saying that even nonbelievers cannot go to hell if they have tried to believe and failed. In order to prove such a statement, Said comes up with a verse from the Quran which says, “Allah burdens not a person beyond his scope.” Said says that if someone tries to believe and fails, one cannot be blamed for that, since God cannot ask him beyond his power. (Louay Hussein, Dialogue on Syrian Patriotism, interviews with a number of scholars, Petra, 2003, pp145-146 – in Arabic).

It is very relevant to say that Said has played a vital role in the current Syrian opposition movement. Said, who is a signatory to the aforementioned Damascus Declaration, has also signed a large number of petitions that ask for democratic change. He has also exercised influence indirectly; a large number of young men and women who are inspired by him are active members of the uprising.

The Doctrine of the First Son of Adam or The Problem of Violence in the Islamic Action is Said’s most prominent book and was written after his first arrest in 1966. In it, the writer shows his non-violent vision of Islam and portrays the issue of violence as a path that leads to change and reform. Said wrote more than twelve books after The Doctrine of the First Son of Adam, all of which were dedicated to the doctrine of non-violence and the reconsideration of the Quranic text from the perspective of non-violence. These books included, Read! And your Lord is the Most Generous; Religion and Law; Until They Change What Is In Themselves; Be as Adam’s Son; Work Is Ability Will; Winds of Change; The Human as a Whole and Justice; Selected Slavery; A Loss of Social Balance; Those of You Who Have Sworn by God But Not by the King; Why is this Fear of Islam? It is worth mentioning that Jawdat Said, who was nicknamed the Gandhi of Arabs, made no mention of Gandhi or even cited him once in any of his numerous writings.

Jawdat Said and the Revolution

Since the outbreak of the Syrian Revolution in 2011, Jawdat Said has been optimistic, especially during the first few months when the revolution was purely peaceful. His words and statements were clearly seen in the signs of the peaceful demonstrations, and he was keen to urge the Syrian demonstrators to hold on to the peaceful movement. He affirmed their just demands when he described the activists as "God's successors on earth." He also commanded them, saying: "Do not insult or strike or run away. Hold on, and say there is no god but Allah." But what he wished for did not last long because the revolution soon turned into an armed and bloody conflict, and the words of Sheikh Jawdat Said were no longer heeded as he had hoped. The violence has reached his own house in his village of Bir Ajam. The house was completely destroyed, forcing him to flee to Turkey.