Nouri became the second contender against Assad for the presidency 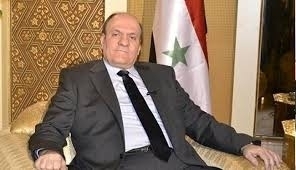 Hassan Al-Nouri has agreed to play a role in what the Syrian opposition has labelled a “farce” and what Assad loyalists call a "democratic festival”. Nouri was a state Minister for Administrative Development and Parliamentary Affairs from  2000 to 2002. He previously served as a Member of Parliament, from 1998 to 2003.

Nouri obtained a BA in Economics and Commerce Department of Business Administration from the University of Damascus in 1982, and a PhD in General Management (Human Resources Development) from John F. Kennedy University in the United States in 1989. He was the Secretary of the Damascus Chamber of Industry from 1997 to 2000.

Hassan al-Nouri was born in Damascus on 2 September, 1960 to a Damascene family of five children. He was raised in the Midan area, in the heart of Damascus, which was one of the first neighborhoods to rise up against the Assad regime and has witnessed serious confrontations, with hundreds of residents killed and thousands arrested.

Nouri is well-known among the commercial community of Damascus as one of the most loyal to the Assad regime, which entrusted him with many important positions, most recently as Minister of State for Administrative Development Affairs.

Personal privileges and deep relationships with the regime

Despite the fact that Nouri did not achieve any really valuable progress in terms of administrative development in Syria during his tenure in office, he nonetheless received many privileges not usually enjoyed by those outside the regime lineage.

Nouri is the secretary of the Damascus Chamber of Industry, a prominent consultant in the Ministry of Transport, a Chairman of the Board of Management in many institutions and arranged the opening of several branches of international universities and institutes without any permission or license from the Ministry of Education. In addition, he has solid relationships with many in the security services.

In 2012 he launched the National Initiative for Management and Change in Syria, which aimed to fight corruption and it seeks administrative reform, human development and to create a kind of interaction between the institutions and the community, but it turned out to be a very weak  initiative.

The candidate who always praises his opponent

Before launching his presidential campaign, nobody had heard Nouri dare to criticize President Bashar Assad nor his policies. Instead, he used to praise his opponent and has declared previously that he admires Assad and agrees with him on several points, particularly the way Assad managed the current crisis and what Assad has described as a "war on terrorism". Nouri has also described Assad as "the son of a great leader".

Recently a number of cars were seen driving around the streets of Damascus with a photos of Nouri in support for his candidacy. The unusual scene prompted a wave of cynicism and sarcasm by the people who watched this silly act in the presidential election play.

In a statement to SANA, Nouri said Syria is living in a free and democratic atmosphere, and free of foreign interference ahead of the presidential elections set for 3 June.

The statement was made during a meeting with members of the Damascus Chamber of Commerce and Industry Directors on Thursday.

Calling for a broad participation in the upcoming election to secure a political victory, Nouri assessed the performance of previous administrations, saying they didn't "care well". He said the state must, of course, have the right to interfere in the economic sphere, “but according to certain criteria and standards".

Nouri had words of praise for the main competitor in the presidential election, excluding Maher Hijjar. “President Bashar Assad exerted immense effort to preserve the country and national principles," Nouri ssaid, also recognizing Assad and the current administration’s successful defense against a three-year-long attempt to destabilize the country.

“The crisis is nearing its end," he said, adding that he anticipates the situation will be much better by the end of the year and expected a U-turn in the position of certain countries towards Syria.