Al-Hassan's cult-like status has helped him cement an image of a fearless and merciless commander in the public eye, with many touting the Syrian colonel as a likely successor to President Bashar Assad 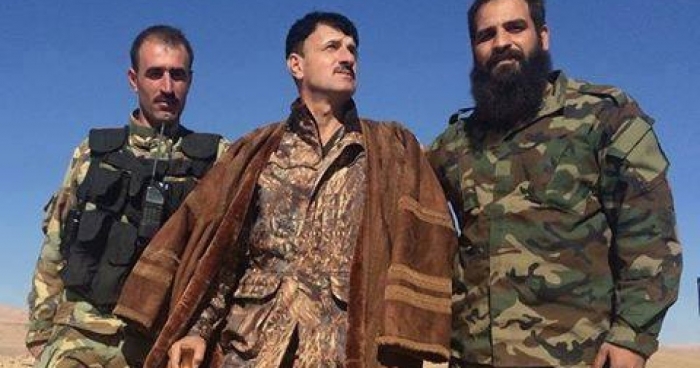 In recent years, Syrian Colonel Suheil al-Hassan has become one of the most iconic and respected names amongst loyalists of the regime of President Bashar al-Assad. News of Hassan’s (reportedly undefeated) military success on numerous fronts has been widely publicized in pro-regime media, with many questioning how the colonel has witnessed such victory while so many other regime commanders tasted defeat.

Known to many as “The Tiger”, Hassan was considered by many to be a necessity for the continued rule of Bashar Assad as the crisis worsened and the battlefronts expanded across Syria. Acting on advice from intelligence officials, Bashar and his brother, Maher, appointed a leader who they believed would act faithfully on their behalf, as well as serve as a symbol representative of the strength of the Assad regime.

Although Hassan is not the only Syrian officer with high-ranking influence, he is regarded as the most influential commander inside the country’s pro-regime areas. Alsouria Net learned from reliable sources that Hassan was given the authority to appoint the heads of the security committees in Hama and Homs, and to assign new directors for Hama’s military intelligence and air force intelligence departments.

Hassan also administers security in the city of Al-Salamiyah in the countryside of Hama, overseeing local air force intelligence in addition to the the region’s largest militia leaders, including Wareeth Alyounis and his brother Rajab, Musib Salamah, Mahmoud Afifi and Ghazwan Alsalmouni. Despite the regular differences between Hassan and the militia warlords, which could sometimes lead to armed conflict, their sectarian relationship played a major role in diffusing tensions and preserving loyalties.

Colonel Hassan’s battle success can in many ways be attributed to his authority to command Syria’s air forces as he desires. He is known for his use of heavy aerial bombardment alongside his private artillery forces, consisting of a group of trucks from the Fourth Armored Division carrying around 130 large guns, in addition to a number of tanks, mortars, armored vehicles and fighters trained in Iran and Lebanon.

The late Syrian President Hafez al-Assad was well known for his supreme control over his notorious air forces and air force intelligence department, and Bashar Assad followed his father’s lead by implementing a similar method of airtight control over these same institutions.

As an Alawite, Hassan has been able to garner favorable influence among Syria’s top military officers, and is one of the only people authorized by President Assad to direct the air forces during battles, despite objections from air commanders and security heads. Although Colonel Fadl Salami, chief of Hama’s security committee, was known to have an amicable relationship with Hassan, Salami refused to obey a number of Hassan's orders, and was consequently relieved of his position as the leader of Hama’s military airport of Hama.

Often described as employing a scorched earth policy, Hassan is known to move his troops only when he is assured the attack area is brutally destroyed, and often justifies his indiscriminate attacks by claiming all civilian areas are potential environments for terrorism to hide behind. According to information obtained by Al-Souria Net, as a show of his authority in front of his troops, Hassan rarely consults with his superiors before issuing orders, allowing him to make decisions during battles without the fear of accountability.

In addition, Iran has offered the commander unrestricted support for his ground units. Officers of The Iranian Revolutionary Guards Corps generously supplied his troops with advanced equipment and special weapons. In return, Hassan commanded his forces as if in a Holy War, appearing on video as a Shiite preacher heralding the coming of Mahdi before the prophesized Day of Judgment.

The Russian air force has focused on supporting Hassan’s troops since the start of Moscow’s incursion into Syria. Moscow’s air cover supported his forces in the Battle of Jazal and recapturing of a number of Syria’s oil fields, as well as in the recent battle to reclaim Kuweiris Airport.

Moscow considers Hassan’s approval a priority as its air forces are heavily reliant on Syrian air bases to launch their missions. Russia’s eagerness to pander to Hassan recently impacted on its capacity to strike in the east of Hama, as its air forces were split between the battle at Kuweiris airport in addition to its strikes in Hama’s northern countryside, Homs and Idleb, which mainly targeted the Free Syrian Army. The complication led to the advancement of Islamic State (ISIS) troops towards Ethria, which endangered regime forces in the area. All distress calls sent by National Defense Forces (NDF) militias were neglected by the military air base at Hama, resulting in the loss of many villages and sites considered of great importance for the regime.

Hassan and His Opponents

For all his popularity and cult-like status among regime supporters, Hassan has faced considerable internal competition to his authority and control, especially in Hama province. The most notable case was his much publicized conflict with Hama’s military intelligence, following several attempts by the local intelligence director to arrange Hassan’s assassination. The most recent assassination attempt, in October 2014, resulted in the director of Branch 219 being removed from his position.

Hama’s military intelligence was not the only concern for Hassan, as a number of pro-regime warlords would become sworn mortal enemies due to deep conflicts of interest, despite their alliances with the commander. Hassan stood as an obstacle for warlord Musib Salamah, who was leading a smuggling and burglary ring in the eastern regions of Hama’s countryside. Although altercations erupted between fighters loyal to Salamah and Hassan, as well as other militia leaders, including parliamentarian Ahmed Aldarweesh, however, common interests usually overcame the problems and the direct confrontation was avoided.

Along with fighters from the pro-regime National Defense Forces militias, Suheil Hassan was also successful in encouraging militants and security services to join him in battle, including military intelligence forces and other armed groups. Yet, his biggest problem emerged when the NDF of Al-Salamiyah separated from Hama’s National Defense Force center in Der Shmiel, often likened to an Assad death camp, where he had a held significant authority and influence.

Following the controversial split, which drew the attention of an irked President Assad, Hassan worked hard to encourage large number of other militias in Salamiyah to fight amongst his ranks.

But Hassan wasn’t satisfied with the results, leading him to form a Special Forces unit named the Striking Force, with support from Iran and Colonel Fadl Salami, the former head of Hama’s military air base. Assisted by top Syrian officers and Iran, Hassan managed to convince the Minister of Defense to exempt all members of his Striking Force from mandatory military service.