Since its inception, the Air Force Intelligence has become notorious for its use of brutal tactics against opponents and civilians. Enab Baladi has charted the careers of those who have headed the intelligence branch. 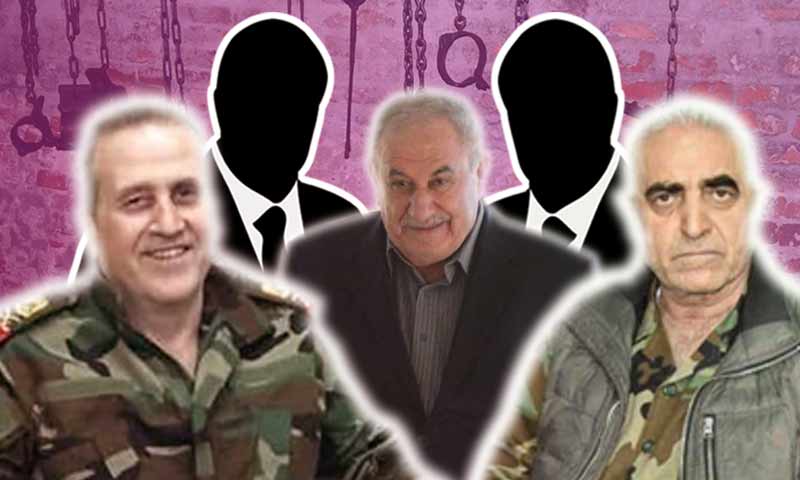 The Air Force Intelligence has been run by six successive figures since its foundation by former President Hafez al-Assad in the 1960s, when he headed the Syrian Air Force.

The first person to head the Air Force Intelligence was Muhammad al-Khuli, born in 1937, from the town of Beit Yashout in Jableh. He had no connection with the Baath Party before he surprisingly appeared in 1970, when Assad took power in Syria.

According to the author of “Syria’s peasantry, the descendants of its lesser rural notables and their politics,” Hanna Batatu, Hafez al-Assad after taking command of the Air Force in 1964, appointed Khuli as deputy commander of the Air Force, before he became its president when Assad took power in 1970.

Khuli remained head of the Air Force Intelligence until Oct. 31, 1987, when he lost his position over the Hindawi affair.

British author Patrick Seale in his book, “Assad: The Struggle for the Middle East,” discussed the Hindawi affair, where Nezar Hindawi tried use his fiancee to smuggle explosives onto an Israeli flight at Heathrow airport in London.

According to the writer, Hindawi acknowledged that he met in Damascus in January 1986 with Khuli—the director of the Air Force Intelligence—and one of his officers, Col. Haitham Saeed, who commanded him to bomb the El Al flight to London.

After the Hindawi affair, which embarrassed Assad before the the world, the blame was finally placed on Khuli, and he was forced to resign, and then appointed assistant to the Air Force commander and remained there until 1994, when he gained a high-level position with Assad and had major influence over him as an adviser on intelligence affairs.

After Khuli’s resignation, the Air Force Intelligence was headed by Major General Ibrahim Huweija. According to Batatu, Syrians considered Huweija to be Khuli’s creation. He was from the town of Ayn Shaqaq, adjacent to the town of Beit Yashout in Jableh.

Huweija took over administration of the intelligence agency in 1987 and remained there until 2002, and there is insufficient information about him.

The head of the Progressive Socialist Party in his testimony before the Special Tribunal for Lebanon in May 2015, accused Huweija of killing his father Kamal Jumblatt when he was an officer in the Air Force Intelligence.

Major General Ezzedin Ismail was from the town of Bastoweer from the Jableh countryside, born in 1947, and was responsible for the security of the air bases in Syria before heading the Air Force Intelligence Directorate in 2002, until he retired in 2005.

European Union sanctions imposed in 2012 included Ismail, saying that Bashar al-Assad had appointed him as a security and political adviser in 2006, and that he was implicated in acts of repression against Syrian opposition.

Abdel-Fatah Qudsiyeh took command of the Air Force Intelligence Directorate after Ismail in 2005, and remained in his position until 2009.

Qudsiyeh was born in Hama in 1953 and served in the special forces and the Republican Guard, and he was promoted to the rank of brigadier general and was close to Bassel al-Assad, and then transferred to the Air Force Intelligence Directorate, rising through its ranks until he became commander, according to the Pro Justice website, which documents war crimes and the figures responsible for them.

He was appointed in 2009 as head of the Military Intelligence Directorate and remained in his position until 2012, when he was appointed deputy to the National Security Bureau director Ali Mamlouk.

Qudsiyeh’s name appeared in a Human Rights Watch report in December 2011, “Individual and Command Responsibility for Crimes Against Humanity in Syria.”

He was also on European and American sanctions lists for his responsibility for many violations against civilians in Syria.

Jamil Hassan is from the village of al-Qarnbah in Homs, born in 1952, and joined the Military Academy in 1972, specialized in air defense. He rose through military ranks until he reached the rank of major general in 2009, the year he was appointed director of the Air Force Intelligence.

Hassan had been assistant to Qudsiyeh when he had headed the directorate, and before that was head of the Air Force Intelligence branch in the eastern areas in Deir ez-Zor in 2009, according to Pro Justice.

Hassan is accused of being behind the idea of using barrel bombs on Syrian opposition positions, which killed thousands of civilians. This attribution was also made by Lebanese analyst, Mikhail Awad, when he did a TV interview thanking Hassan for his invention of the indiscriminate weapon.

The European Union sanctions list against regime figures in 2011 included Hassan, for his responsibility for crimes against Syrians.

In February, the Interpol organization to fight international crimes put a red mark on Hassan’s name, according to European sources in the newspaper Al-Sharq Al-Awsat.

Major General Ghassan Ismail, born in 1960, is from the Draykish area in Tartous province.

His name became prominent during his service in the Air Force Intelligence Directorate when he had been head of the special missions branch.

According to Pro Justice, he had taken part with members of this force, as well as the Fourth Division, led by Maher al-Assad, in repressing protesters in the towns of Daraya and al-Moadhimiyeh in July 2011.

In the testimony of a defector from these special forces published by Human Rights Watch in December 2011, Col. Ghassan Ismail had given verbal orders to shoot at protesters in June 2011.

According to the site, Ismail was directly responsible for the forcible disappearances of thousands of civilians and for the killings of a large number of prisoners in the al-Mezzeh Military Prison, which pushed the European Union in July 2012 to add his name to its sanctions against the regime on a list including 27 Syrian regime officials.