Syrian Defense Ministry has announced that the latest class at the Women’s Military Academy has graduated and will be named after the martyr Brigadier General Imtisal Ali Salih. 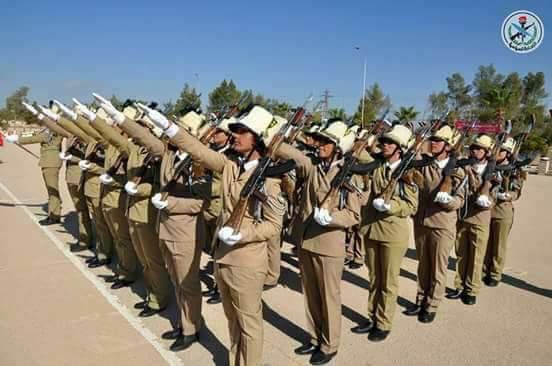 Under the sponsorship of the General Commander of the Army and Armed Forces, the graduation of a new batch of students from the Women’s Military Academy was celebrated. The ceremony was opened with a minute of silence in honor of the souls of the righteous martyrs, and then army musicians played the national anthem of the Syrian Arab Republic. That was followed by a military presentation in which academy classes participated. The Major General, a representative sponsor for the ceremony, delivered a speech for the graduates, conveying the congratulations of the General Commander of the Army and Armed Forces, and wished them success in carrying out their missions alongside their comrades in our valiant armed forces and in completing their sacred duties in defending the nation and repelling the most vicious forms of regionally and internationally-supported terrorism.

In closing his speech, the representative sponsor conveyed his thanks to the leadership of the Women’s Military Academy and all trainers and workers there for the efforts they have made in training the students and preparing them to defend the nation’s security and preserving its soil.

The director of the Women’s Military Academy delivered a speech in which she advised the students to keep up their training, discipline, diligence and efforts and to follow up on all new developments in military sciences and to continuously develop their skills and knowledge.

After that, the ceremonies for the handover and receipt of the flag took place, and the graduates led the military section. This was followed by the success order and approval from the General Commander of the Army and Armed Forces for the class to be named after the heroic martyr Brigadier General Imtisal Ali Salih, in recognition of her martyrdom and the immortality of the righteous martyrs. Symbolic gifts were distributed to the graduates, and the first student presented the class shield to the Major General, a representative sponsor of the ceremony, as well as to the families of martyrs as a token of loyalty for the blood of the martyrs. The ceremony closed with the national anthem.