Mazen Dawrish, journalist and rights activist, was recently awarded the PEN Award together with Salman Rushdie. This is the acceptance speech he sent from prison. 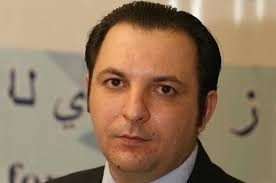 To the honorable and distinguished ladies and gentlemen present,

How often have I hoped to be present in London some day, in this great city whose spirit – which imbues the works of John Locke, Shakespeare, and authors of the Magna Carta – has accompanied me year after year. It is, perhaps, from these men that I have learned how nations progress steadily and rationally toward civility and modernity. For that reason, I cannot express to you how proud I am that my name should be present among you, even if I cannot be, especially in affiliation with PEN International, for which I have respect and admiration. In a short time, this organization has proved its credibility in remaining dedicated to its goals, and to civilized values. I give you all of my thanks for this great honor: this year’s International Writer of Courage Award.

If you will allow me, I will exploit the presence of the controversial author Salman Rushdie to say to him that – despite our deep differences – we in the Arab world committed a grave, unforgivable mistake when we did not recognize the crisis represented by the demands and fatwas calling for your murder. Indeed, we were silently complicit because we dismissed the matter as if it was none of our concern. Today, we are paying dearly for this in our own blood. We are now the greatest victims of this obscurantist mode of thought that has infiltrated our cities and homes. Unfortunately, it has required all of this bloodshed to convince us that we are the ones who will pay the price for preventing those whose opinions differ from ours from expressing themselves, and for us to finally realize that we are digging our own graves when we respond to thought by apostatizing, and meeting opinions with violence. The results of this in the Arab world are clearly catastrophic. This is especially the case in Syria, where every day the most grotesque forms of fascism and the most repulsive forms of barbarism are practiced – whether in the name of the nation or of Islam.

And since when has Islam meant killing the human spirit and destroying morality?

Esteemed ladies gentlemen, despite the ugliness and tragedy of the situation in my country, and despite the amount of blood and destruction caused daily by those who seek to make the Assad regime’s reign permanent or to build an ISIS caliphate, I honestly am confident about the future. Syria, which gave humanity its first alphabet, whose soil has sustained thousands of years of civilization, and which has hosted every religion, sect, and intellectual current, will never be tyranny’s slave or terrorism’s beast of burden. Syrians are lovers of life who can build a state based on dignity, freedom, and justice. They are capable of understanding and applying the spirit and essence of humanity’s religions, including Islam, the religion of moderation, whose main goal was defined by the Prophet Muhammad (Peace Be Upon Him) when he said, “I was sent to perfect the nobility of morals.” Caliph ‘Umar Bin al-Khatab (May God Bless Him) confirmed Islam’s essential relationship to freedom when he roared, “How do you enslave people whose mothers birthed them free?” And Caliph ‘Ali Bin Abi Talib (May God Bless Him) announced his total and final break with the tyranny connected to slavery, saying “He who imposes his opinion will perish.”

Morals, freedom, and justice are the essence and aim of the true Islam. This is the case with all human religions and moral systems. It is also the basis that we must use to rebuild our cultural inheritance, to ensure that religion and human rights play their roles in harmony with each other, and to create a structure capable of securing stability and safety for all Syrians, protecting their unity and diversity, and guaranteeing justice and equality among them.

Ladies and gentlemen, allow me today to mention my friends who, as I have always said, are much greater than words can describe, and more numerous than can be counted. There is no prison in Syria that does not contain one of them, and there is no graveyard in Syria today that one of them does not grace. So that I do not make matters more complicated for them and their families, I will not name them, but I have inscribed their names in my soul. Some Syrians still think that only iron and fire can ensure their survival, and others fear democracy more than they hate dictatorship. I tell them to stop what they are doing, because unlike people, ideas cannot be killed.

Friends, how often have sectarianism and dictatorship discriminated among people? Yet belief unites them, and for all who believe in a better tomorrow in Syria and the world, this is not the end of history, but the beginning of an era in which humanity will free itself from dictatorship and terrorism.

Friends, do not lose your belief – victory will be the ally of those who believe in it. Allow me also to address my brothers, the sons of my mother, Syria. Everyone today curses tyranny and terrorism as if both were the exception rather than the rule, and as if over the past decades they themselves have not sustained them either passively by their silence, or actively!

Sons of my mother, Syria:

Have you not had your fill at the banquet of the bodies of the children of Ghouta, who were roasted with chemical weapons? Have you not drunk enough of the blood of the innocent children of ‘Akramah school? Have you not delighted enough in the howls and screams of our beloved Kobani?

Or do we need more?

Is not the life of one child worth more than all of the gains, spoils, and dreams of permanent reign? Can we not achieve victory through anything but the occupation and the division of our nation?

Has the time not yet come?