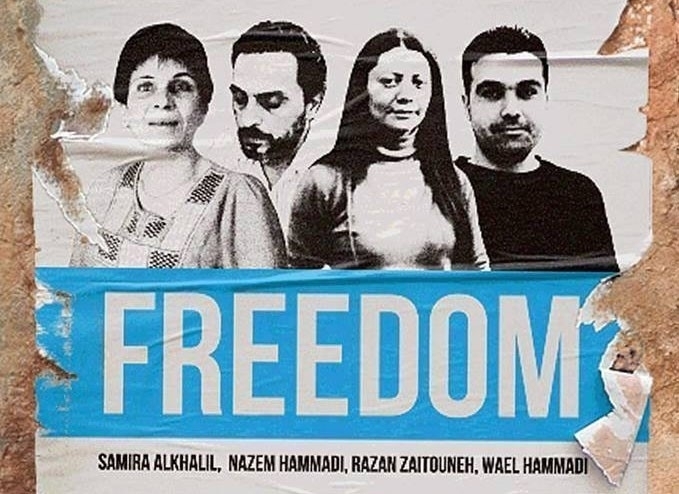 A year on, no information on Douma Four

The prominent Syrian human rights defenders Razan Zeitouneh, Samira Khalil, Wael Hamada and Nazem Hamadi – the Douma Four—remain missing a year after their abduction, 57 organizations said today. The four were abducted in Douma, a city near Damascus under the control of armed opposition groups. They should be released immediately, the groups said.

On 9 December 2013, at about 10:40 pm, a group of armed men stormed into the office of the Violations Documentation Center in Syria (VDC), a Syrian human rights monitoring group, in Douma and abducted Razan Zeitouneh, the head of the center, and her colleagues – Wael Hamada, who is also her husband, Samira Khalil and Nazem Hamadi. The four human rights defenders have not been heard of since.

The armed groups exercising de facto control over Douma include the Army of Islam, headed by Zahran Alloush, which is part of the Islamic Front, a coalition of armed groups. The groups should immediately release the four human rights defenders if they are in the groups’ custody, or work toward ensuring they are released unharmed and without delay. Countries that support these groups, as well as religious leaders and others who may have influence over them, should also press for the immediate release of the four activists and for an end to abductions of civilians.

Razan Zeitouneh has been one of the key lawyers defending political prisoners in Syria since 2001. Since the beginning of the crisis in 2011, Razan Zeitouneh has played a key role in efforts to defend human rights for all and protect independent groups and activists in Syria. Along with a number of other activists, she established the VDC, which monitors human rights violations and records casualties in Syria, and co-founded the Local Coordination Committees (LCC), which coordinates the work of local committees in various cities and towns across Syria. She also established the Local Development and Small Projects Support Office (LDSPS), which assists non-governmental organizations in besieged Eastern Ghouta.

As a result, both the Syrian authorities and armed opposition groups threatened her. She had been receiving threats for several months before her abduction. She described some of these threats in an article she wrote in the online news outlet Now Lebanon. She had also informed human rights activists outside Syria in September 2013 that she was being threatened by local armed groups in Douma. In April 2014, Razan Zeitouneh’s family issued a statement holding Zahran Alloush responsible for her and her colleagues’ wellbeing, given the large presence his group maintains in the area.

Samira Khalil has been a longtime political activist in Syria. The Syrian government had detained her between 1987 and 1991 for her activism. She later worked in a publishing house before shifting her efforts to working with the families of detainees and writing about detention in Syria. Before her abduction, she was working to help women in Douma support themselves by initiating small income-generating projects.

Wael Hamada was also an activist before the uprising in Syria. When peaceful protests first broke out in the country in 2011, the government detained and later released Hamada. He is an active member and co-founder of the Local Coordination Committees and the VDC. Before his abduction Wael Hamada was working to provide desperately needed humanitarian assistance to the residents of besieged Eastern Ghouta.

Nazim Hamadi, a lawyer and poet, was one of the most prominent volunteer defenders of political prisoners before and after the uprising in Syria. He contributed to founding the Local Coordination Committees and also worked to provide humanitarian assistance to residents of Eastern Ghouta.

Razan Zeitouneh and her colleagues appear to have been abducted and arbitrarily deprived of their liberty as punishment for their legitimate activities as human rights defenders. Such actions are prohibited by international humanitarian law and are contrary to international human rights standards. The armed groups in control of the area and the governments who support them should do everything in their power to facilitate the release of Razan Zeitouneh, Wael Hamada, Samira Khalil and Nazem Hamadi.

6 – Badael for sustainable peace in Syria.

7 – Caabu – The Council for Arab-British Understanding.

9 – The SKeyes Center for Media and Cultural Freedom.

41 – Swedish network for democracy and HR.

45 – Syrian Center for Media and Freedom of Expression (SCM).

54 – The Kvinna till Kvinna Foundation, Sweden.

55 – The World Organization against Torture (OMCT).

56 – Center for Civil Society and Democracy in Syria CCSDS.