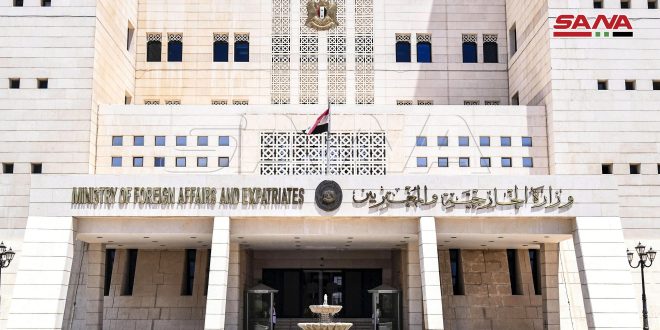 Syria has strongly condemned the unjust European Union (EU) decision to extend the illegitimate unilateral coercive measures imposed on the Center for Scientific Studies and Research and some of its employees, affirming that they are doomed to abject failure, an official source at the Foreign and Expatriates Ministry said in a statement to SANA.

The source added, “It has become clear that these measures come in the context of systematically targeting Syria, and they lack the slightest degree of objectivity and credibility, especially after the lies launched by countries hostile to Syria and their continued attempts to politicize the work of the Organization for the Prohibition of Chemical Weapons (OPCW) and to divert it from its missions to serve the conspiratorial project against Syria.”

The scandals that accompanied the work of some of the OPCW investigation teams and the confessions of many investigators with regard to the pressure exerted on them clearly prove this, the source noted.

“The Syrian Arab Republic, which voluntarily joined the Organization for the Prohibition of Chemical Weapons and fulfilled all of its obligations in a record time, reaffirms once again that these desperate attempts to continue targeting Syria are doomed to abject failure, and they will only increase its insistence on defending its sovereignty and interests and preventing any interference in its affairs,” the source said.

The source concluded, “the European Union, which has agreed to be a tool for implementing the policies of Syria’s enemies, proves once again that it has lost the minimum independence of decision-making and is not qualified to play any positive role in the international arena.”

Remarks by the Syrian Observer: The Center for Scientific Studies and Research, as well as its management and staff, have been the target of various sanctions by Western Countries since 2011, for the center’s alleged role in the development of weapons of mass destruction for the Syrian regime. The Council of the EU recently approved extending sanctions and measures against entities and individuals allegedly responsible for the development and use of chemical weapons in Syria, until October 16, 2022.
This article was edited by The Syrian Observer. The Syrian Observer has not verified the content of this story. Responsibility for the information and views set out in this article lies entirely with the author.