The Syrian opposition-held Idleb has been witnessing a peak in coronavirus infections for the last few months, reaching a daily rate of 1,000 cases, according to North Press. 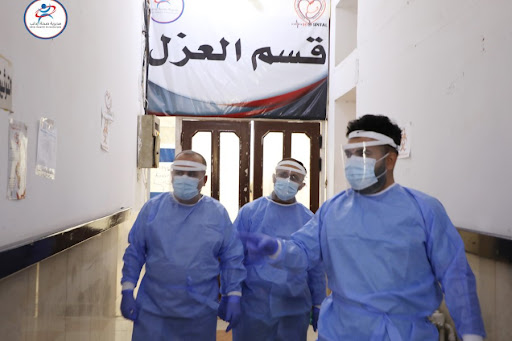 Since the middle of September, the Syrian opposition-held areas around Idleb have been witnessing a significant increase in coronavirus infections, which reached 1,000 daily, in a wave considered the most widespread so far.

Syria’s opposition-held areas recorded 74,474 infected cases, 1,255 deaths, and 38,525 recoveries according to the latest statistics published by the Syrian Interim Government.

Abdulhay Kayali, the supervisor of the ICU at Salqin Quarantine Center, said that the reason for the explosion in the number of coronavirus infections is the large population density compared to the small geographical area in Idleb and northwestern Syria, in addition to that people do not take the pandemic seriously.

Also, the concerned authorities did not take the necessary steps to limit gatherings, such as stadiums, amusement parks, and markets, and most people did not accept the idea of a vaccine.

In an exclusive interview with North Press, Kayali said: “In fact, until today, no real measures have been taken to limit the outbreak of the virus, and we still find popular markets, events, and restaurants open and full of people.”

He pointed out that the hospital is currently working with a capacity of 100%, “and there is no vacancy to receive any new patient, as we are waiting for a patient to die or recover so that we can receive a new one.”

Salqin Hospital, which is a quarantine center supported by the Syrian American Medical Society organization (SAMS), is equipped with 70 beds, 30 of which are ICU with artificial respirators, and 40 ward beds, and intermediate care.

For most of the last days, the hospital recorded between two and four deaths of coronavirus, according to Kayali.

The ICU supervisor at the hospital describes the current situation in northwestern Syria as catastrophic, as patients die in the emergency departments of hospitals and sometimes on the streets because there are no rooms in quarantine centers and hospitals.

Dr. Hussam Qara Muhammad, who is responsible for the coronavirus file in the Idleb Health Directorate, said that the Delta variant has reached northwest Syria since the Eid holidays, as a crossing between Turkey and Syria opened before Eid al-Adha.

He added that the vaccines that reached northwestern Syria only sufficed 2% of the region’s total population.

Idleb includes six hospitals for Covid-19 and ten quarantine centers, all of which are full, except in the event of the death or recovery of a patient.

As Dr. Muhammad al-Saleh, who is the coordinator of the Assistance Coordination Unit (ACU, affiliated with the National Coalition), said that the increase in the number of people infected with the coronavirus is due to two reasons. The first is related to the nature of the Delta variant, which spreads five times faster than the original pattern.

In addition to the weak commitment and adherence to the requirements of personal protection measures, and the weakness or often absence of measures imposed by local authorities.

Saleh added all areas in northern Syria are affected, and everyday report records in terms of the number of Covid-19 infections.