Bashar al-Jaafari has thanked the Group of 77 and China for their support and their continued efforts to help end the looting of natural resources writes SANA. 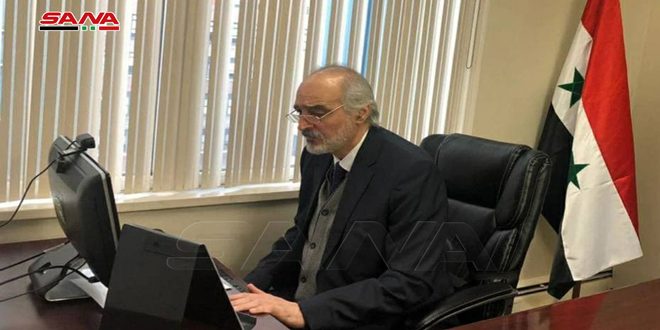 Syria’s Permanent Representative to the UN Bashar al-Jaafari stressed that Syria counts on the valuable support of the Group of 77 and China for putting an end to the looting of its natural resources and the foreign occupation of its lands.

In his speech at the first virtual meeting of the ambassadors of the Group of 77 and China for 2021, chaired by Guinea, Jaafari said that the challenges our world is facing today are huge. He said that in a very short time the coronavirus pandemic has paralyzed efforts exerted to achieve the sustainable development of the 2030 agenda, and the epidemic has revealed the fragility of our world and shown how much we are interconnected.

Multilateral cooperation has been always the best way to overcome all global challenges, Jaafari indicated.

He pointed out that solidarity among the Group’s members has always been the key to its success since its foundation, which allowed the states to defend their interests, therefore they should preserve it by all means.

Jaafari emphasized the importance of the annual decision of the group entitled “The permanent sovereignty of the Palestinian people in the occupied Palestinian territories, including Eastern Jerusalem, and the Arab people in the occupied Syrian Golan on their natural resources,” noting that, “We count on the valuable support of the Group to put an end to looting our natural resources and the foreign occupation as a whole.”