Foreign Minister Faisal Mikdad has met with Hassan Rouhani and discussed challenges that the two countries face and means of strengthening their relationship writes SANA. 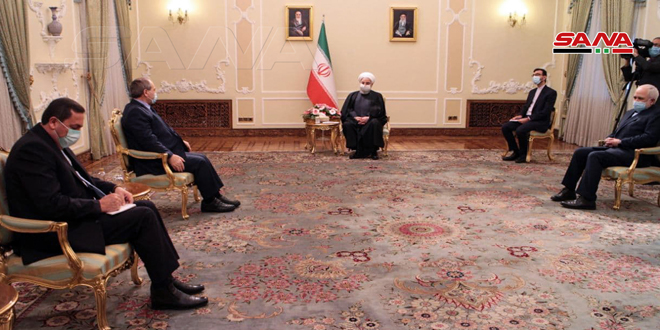 Iranian President Hassan Rouhani affirmed that the relations between Iran and Syria are strategic and brotherly, stressing that facing the Israeli occupation and terrorism is a common goal for the two countries.

During a meeting with Foreign and Expatriates Minister Dr. Faisal Mikdad, Rouhani noted that the relations between Tehran and Damascus, which date back to the victory of the Islamic Revolution in Iran, continue today with the same strength, will and decision of the two countries’ officials.

Rouhani asserted that Iran will always stand by the side of Syria as a government and people and is determined to support it as a strategic ally and will always remain by its side until permanent victory is achieved.

He underlined the importance of the bilateral and multilateral cooperation for the reconstruction of Syria and for facilitating the return of the refugees and the displaced to their cities and villages, adding that Iran considers the final Astana Format as useful for preserving Syria’s interests and territorial integrity.

President Rouhani pointed out that facing the Israeli occupation and combating terrorism is a common goal for the two countries, saying “We have no doubt that we must continue to resist till the end.”

Rouhani condemned the signing of a document by the outgoing US President Donald Trump through which Washington recognizes the annexation of the occupied Syrian Golan to the Israeli occupation entity, asserting that we should face the Zionist occupiers until all occupied territories are liberated including the Syrian Golan.

Mikdad, for his part, described the relations between Tehran and Damascus as one of the most valuable and honest political relations in the world, saying, “We believe that other states should learn from these relations how to build true friendly relations and how to continue them strongly.”

Mikdad affirmed his determination to enhance these relations and to develop them in all domains in a way that would serve the interests of the two brotherly countries and peoples.

He considered that the violation of international obligations and agreements by the US government is illogical, noting that “Signing the nuclear deal by Iran and the P5+1 countries has been constructive and useful…and the efforts exerted by Iran to oblige the negotiating parties to abide by their commitments were suitable and constructive.”