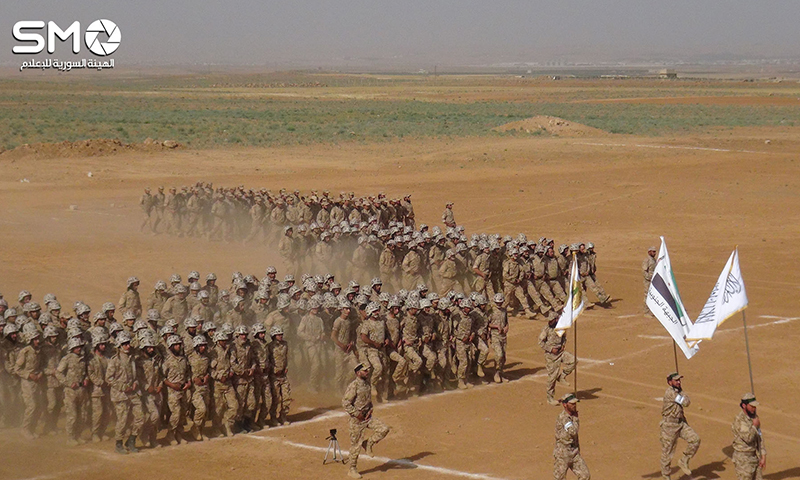 Tensions continue in the eastern countryside of Daraa, in light of the ongoing raids and searches launched by Assad’s forces, in search of wanted security personnel and other dissidents from the Assad regime.

A source from the Daraa countryside told Alsouria Net on Saturday that Assad’s forces launched a raid and search campaign in the vicinity of the town of al-Musifra in the eastern countryside.

According to the source, the campaign also targeted the farms and tents of clans from the Lajat area in the eastern Ghariya region, indicating that a convoy from the Fifth Corps had arrived in the area to contain the security campaigns and stop them.

The above comes days after Assad’s forces besieged the town of al-Karak in the eastern countryside of Daraa, in a move to put pressure on the people of the region in order to get them to hand over wanted persons, as well as light and medium weapons.

Pro-regime networks published videos on social media that showed the size of the reinforcements that Assad’s forces had brought in, in recent days.

Four former opposition members were killed in Daraa by unknown gunfire on Saturday, in three separate operations, two of which were in the western countryside, as reported by Enab Baladi’s correspondent in Daraa.

According to the Ahrar Horan Assembly Media Association, Abidin is accused of working for Military Intelligence Branch 215, following the settlement agreement that took place in July 2018.

Unidentified persons also killed Yaman Jumaa al-Khayyat and Hassan Hamid al-Khayyat, who were shot in the village of Nahj, west of Daraa.

Manhal al-Halqi was also targeted in the city of Jasim, north of Daraa, which led to his immediate death, according to the local Daraa 24 network. Halqi is accused of working for the Military Security Branch in Daraa.

Assassinations became recurrent in Daraa after the Syrian regime forces, with Russian support, took control of the governorates of Daraa and Quneitra in July 2018, according to an agreement imposed on those who wanted to “settle” their situation in the region.

No party claimed responsibility for the assassinations, with the exception of some operations that are claimed by the Islamic State.

Assad forces and their Russian ally were able to take control of the governorates of Daraa and Quneitra, in July 2018, according to settlement agreements, following days of bombing with various types of weapons and military reinforcements.

Since the signing of the agreement in 2018 and until now, Daraa Governorate has not settled down and has not witnessed any stability. On the contrary, Daraa has been witnessing incursions and raids by Assad’s forces every now and again.

In addition, the governorate has had an “invisible” killer whose identity is still unknown. He has carried out a series of assassinations, targeting military personnel from both the regime and the opposition as well as civilians, media, and local activists.