Russia is continuing its assault on towns and villages in Idleb, with civilians being hit by artillery shelling reports Nadaa Syria. 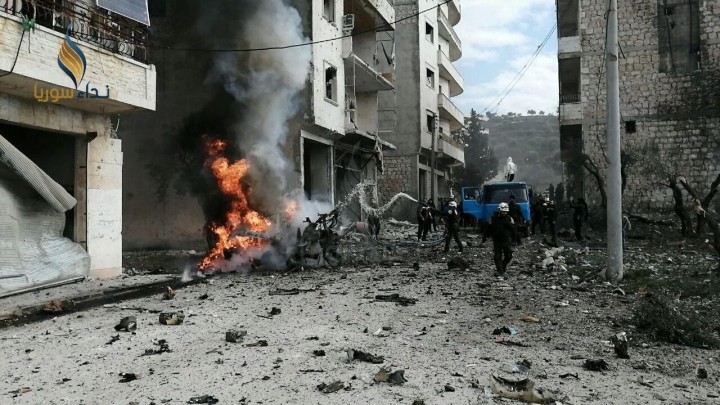 Russian militias have expanded their bombardment of villages and cities in the countryside of Idleb, in northern Syria, leading to 13 casualties, all civilians.

Nadaa Syria’s correspondent said that two civilians were killed and 10 wounded due to artillery shelling of the city of Jericho in Jabal al-Arbaeen, adjacent to Jabal al-Zawiya in the southern countryside of Idleb.

The area between the towns of Binnish and Foah, northeast Idleb, was also targeted, in addition to al-Nayrab. Turkish forces are present in al-Nayrab, west of Saraqib, in the eastern countryside of the governorate.

This comes as the region is witnessing a continuous presence of Russian warplanes accompanied by reconnaissance planes that circle over almost daily, in conjunction with continuous bombing in the eastern countryside of Hama and Deir ez-Zor Governorate, where there have been continuous clashes with the Islamic State.

The Russian planes killed and wounded dozens of Syrian National Army members, as a result of targeting a training camp north of Idleb, which was criticized by the Turkish president this morning, who considered what happened, “an indication of Moscow’s lack of support for permanent peace and stability in the region.”