A Swedish delegation has visited a camp for refugees in Hassakeh, but questioned why there are so many problems when they are sending so much money writes AHNA. 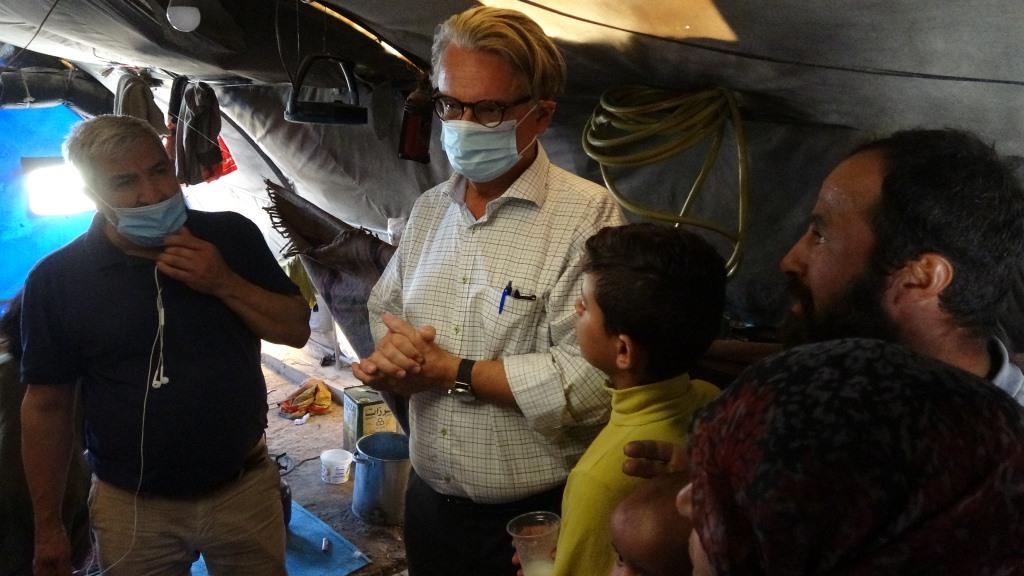 On Saturday, a delegation from the Swedish Ministry of Foreign Affairs arrived in northern and eastern Syria, via the Semalka Border Crossing. The delegation was made up of the head of the delegation, the Chargé d’Affaires for Syria at the Swedish Ministry of Foreign Affairs, Per Örnéus, Thomas Marcus, who works in foreign and humanitarian aid for Sweden, as well as the advisor at the Brussels European Institute for Peace, Avin Jetin.

On Sunday, the delegation visited the Washokani camp, 12 kilometers west of Hassakeh city center. The visit comes within the framework of examining the conditions of the forcibly displaced from the border areas after the Turkish attack on the Ras al-Ayn region and its villages on Oct. 9, 2019.

The delegation held a meeting with the administration of the Washokani camp during which they talked about the conditions of the displaced. The delegation asked several questions pertaining to the type of work the displaced do in the camp, the languages they study, the components making up the camps, and whether the displaced have been to their cities after the occupation.

Örnéus said, “We, in Sweden, offer exorbitant sums to the United Nations agencies. We are confused as to why they have not done their job in the Washokani camp until now.”

The delegation expressed its surprise at the failure of the organizations inside the camp to do their work and their underwhelming performance, despite the large sums of money they were receiving in the form of aid.

For his part, co-chair of the Washokani camp council, Ala’eddin Jamil, told the delegation, in response to their questions, that, “the displaced live in very difficult conditions in the camp due to the lack of available resources at this point in time. The languages taught in the camp are the mother tongue of each component, and there are both the Arab and Kurish components in the camp.”

Jamil added, “At the beginning, some of the displaced did return to visit their homes, but after the practices of the Turkish occupation in seizing those homes, in addition to the kidnapping and killing, no one was able to return.”

The delegation visited the camp school and some tents, inspected the displaced’s living conditions, and listened to their demands.

The delegation promised the displaced to do their best to ensure their return to their homes, and that it would audit the work of the organizations present in the camp and get to the bottom of why they were not working as required, despite the large sums they have been receiving.