The Syrian Network for Human Rights has confirmed that largescale violations continue to take place across the country and by all parties, although the regime remains the main perpetrator 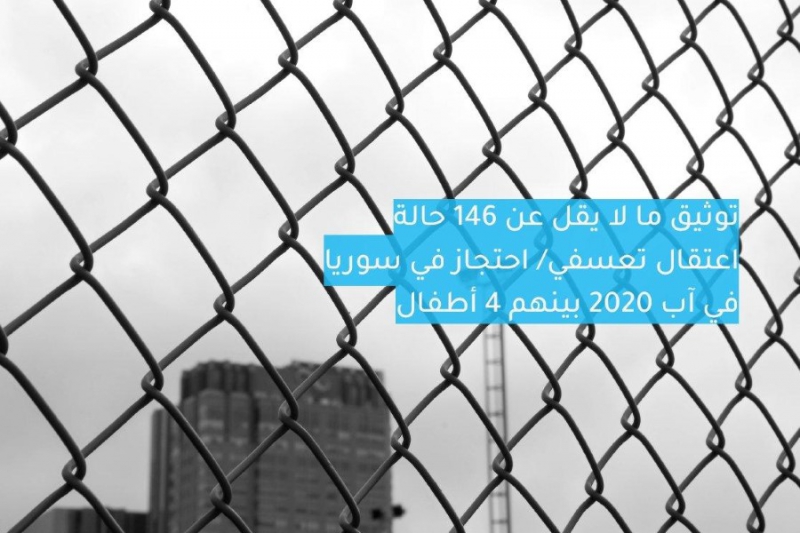 The Syrian Network for Human Rights said in its report, released today, that no less than 146 cases of arbitrary arrest and detention — including four children — were documented in August 2020.

The report mentioned that there are documented cases of detention against refugees returning to Syria from Lebanon, a journey that is still not safe.

According to the report, Syrian regime forces ceaselessly pursued Syrian citizens in August, based upon their affiliation with the political opposition and their opinions — which are honoured by the constitution and international law — and indicated that the arbitrary prosecutions and arrests affected a number of Syrians who were displaced from the areas controlled by the regime.

The report documented no less than 146 cases of arbitrary arrest and detention, including four children, 115 of whom are forcibly disappeared.

The report documented 31 arrests and detentions at the hands of the armed opposition and the National Army, 23 of whom became forcibly disappeared.

Twenty-one arrests were documented at the hands of Hay’at Tahrir al-Sham, — including one child — 16 of whom were forcibly disappeared.

According to the report, most of the arrests took place in Aleppo, Deir Ez-Zor, and Idlib.