The deaths of a number of regime officers have been reported, although the exact cause of the deaths is not clear reports Shaam News. 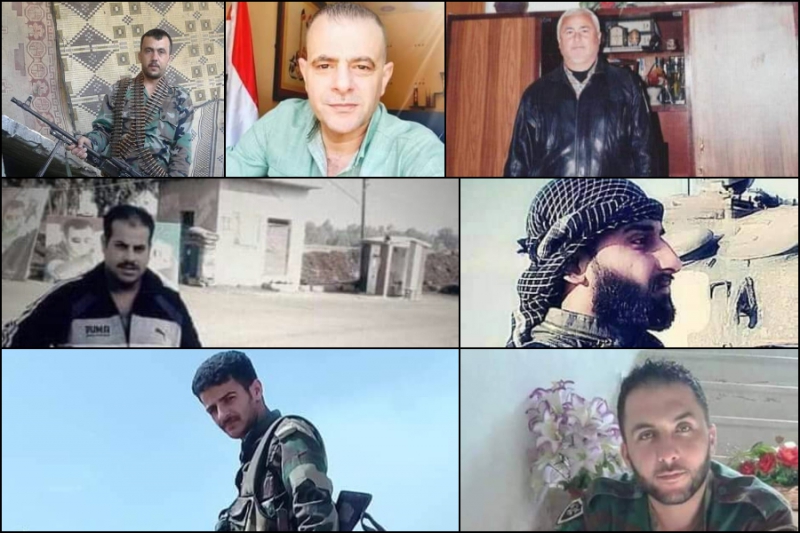 Shaam News Network wrote about the killing of at least nine officers within the ranks of the regime’s militias. Stories differed about the circumstances of the killing of most of them, which varied between bouts of sickness and secret accidents, especially the officers who were killed during the past few days.

The regime’s pages mourned a high-ranking officer, as photos of a colonel in the regime’s intelligence services started circulating. His name is Mamoun al-Khader, from the Political Security Branch in Aleppo, and was killed under mysterious circumstances.

Pro-regime pages said that Imad Jadeed, originally from the village of Qalat Bani Qahtan in the coastal city of Jableh died after a supposed heart attack. The photos circulating of him show his participation in the military operations against civilian areas.

Pages that report news from coastal areas mourned the regime’s army officer, Issa Muhammad al-Issa, without revealing the circumstances of his death, while a picture of him in regime army uniform was circulated.

Moreover, Hassan Habib Ziyoud died of health problems, according to pro-regime pages, which indicated that Ziyoud hails from the town of Beit Yashout in Jableh, near Lattakia governorate. The news claimed that he died of a heart attack.

The same sources revealed the death of Ghaith Hamada, originally from the village of Jourat al-Shanfour in the countryside of Tartous, without mentioning additional details about the circumstances of his murder, while some other pages claim that he died in a car accident.

The city of Qardaha welcomed the body of a lieutenant-level officer called Laith Suleiman Sultanah. The regime’s pages said that he was killed defending the homeland in Homs, without specifying the circumstances of his death.

The regime’s pages wrote about the death of one of the regime’s militia members, Ahmed Abdel Qader Sweid, and said that he was killed in the countryside of Idleb. Sweid hailed from from the southern neighborhood of al-Malaab in the city of Hama. The pages also revealed the death of Musa Muhammad al-Ahmad, without mentioning the location of his death.

An officer with the rank of lieutenant in the regime’s army, Muhammad Omar Hamad, was also killed. He hailed from the city of Douma. Pro-regime media sources said that he was killed in the city of Daraa in an ambush by what they described as “militants.”

It has become customary for the regime’s pages not to disclose the names of those who die as a result of “reconciliation operations,” at a time when pictures of the dead from pro-regime villages are published and only approximate numbers are made accessible to the public.

The regime’s militias have suffered great losses as a result of the escalating assassinations, as is the case with every attempt they have made so far on the battlefronts in the liberated north.