Berwyn Ibrahim has protested outside the People’s Assembly, claiming that the recent elections were fraudulent and that was the reason for her defeat writes Shaam Network. 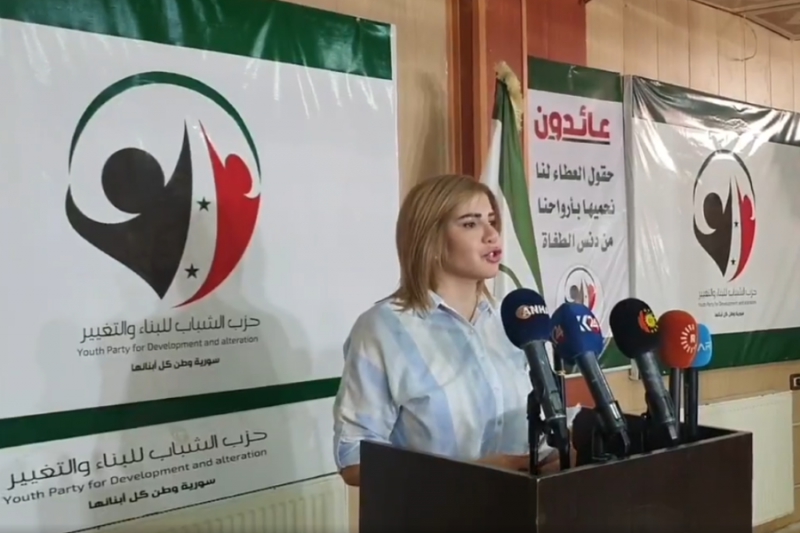 The Youth Party for Development and Change confirmed the news that the Assad regime has arrested the head of the party, which is licensed by the regime itself, Berwyn Ibrahim, on Monday in front of the People’s Assembly building in Damascus, where Ibrahim participated in a sit-in claiming that her failure in the elections is due to fraud.

Al-Khabour News Network said that the regime forces arrested Ibrahim after she questioned the integrity of the People’s Assembly elections.

The Kurdish Rudaw website wrote that among the detainees are three members of the Youth Party, namely Basil Hokan, Jaafar Mashhadiya, and another member from Aleppo, while they were participating in a protest in front of the “Applause Assembly” building. (Editor’s note: The Applause Assembly is a name used by the opposition as an alternative to the People’s Assembly)

Each of the Solidarity Party, the Youth Party for Development and Change, and the Syrian Democratic People’s Party, which are all opposition parties licensed by the regime, have called for a symbolic protest in front of the Assad parliament during its first session on Monday. They said that they are demanding a democratic process, which the regime ended with the arrest of a number of people and Ibrahim.

“Applause Assembly” candidate, Ibrahim, had previously launched a scathing attack on the Baath Party, accusing it of being exclusionary, refusing to participate in the political process, and behaving as if the Syrian state were their jungle. In a video she put up on her Facebook page, Ibrahim wondered what the previous parliament, which was controlled by the Baath Party, offered the people.