As residents of Deir ez-Zor protest the presence of the SDF and the US forces, their homes have been raided and a number of people have been kidnapped writes SANA. 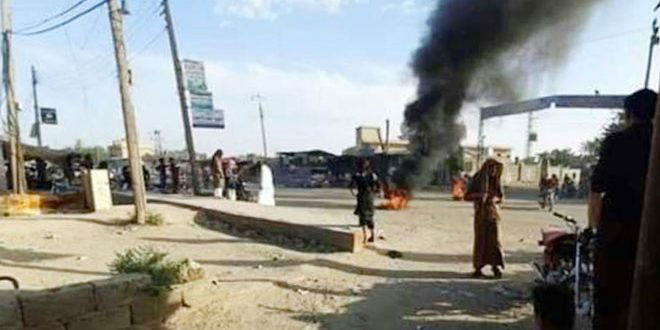 US-backed Syrian Democratic Forces (SDF) stormed properties and kidnapped a number of civilians in the city of al-Shuhail in Deir ez-Zor’s southeastern countryside, as protests demanded the expulsion of the group and that of the US occupation forces in the area.

Local sources told SANA that the SDF stormed the houses of the citizens in al-Shuhail city, kidnapped a number of civilians and set up several checkpoints inside the city in an attempt to control the protests that many villages and towns in Deir ez-Zor’s countryside are witnessing.

The sources pointed out that the SDF burnt a number of the citizens’ houses in al-Shuhail city in retaliation against those who demonstrated in protests against its criminal practices.

Over the last two days, the SDF imposed a siege on al-Shuhail, al-Busayrah, al-Hawaij and Dhiban towns in Deir ez-Zor’s countryside, and brought military convoys to al-Shuhail city, imposed a curfew and kidnapped a number of civilians.