Young Syrian novelist Sulafa Kafi has completed her second book, as she continues to try and educate the public about issues relating to refugees and Syrian traditions writes Zaman Al-Wasl. 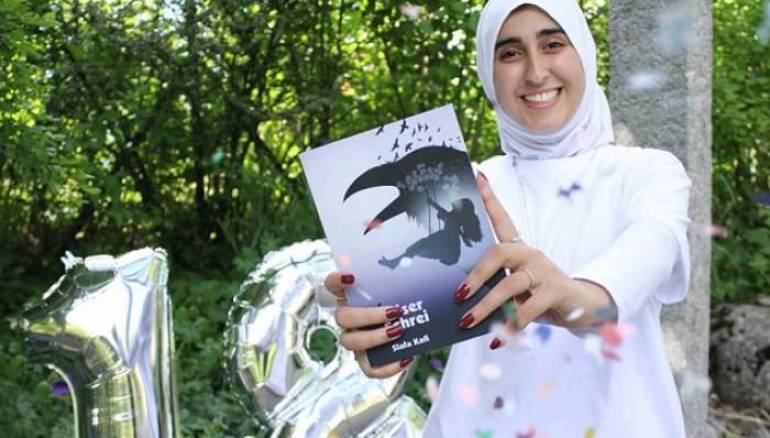 German cultural and media circles have celebrated ‘Leiser Schrei’, the second novel to be written in German by the young 18 year-old Syrian writer Sulafa Kafi. Her first novel was called ‘Zwei Secunden’.

When she was 10-year-old, Sulafa moved with her family from the city of Derik (al-Malikiyah) in late 2012 to Germany. She was able to face the problem of language integration because she was young. Kafi told Zaman Al-Wasl that writing novels was a dream she had since childhood.

Her dream was fulfilled when she was 14, with the publication of her first novel ‘Zwei Sekunden’ (Two Seconds), which she completed at a time when refugees were being attacked because they were coming to Europe in large numbers. The young girl’s purpose was to make the Germans change their attitude about people who desperately need help and stand up to racism and the need for openness and tolerance.

‘Zwei Sekunden’ is about a family forced by circumstances to leave their homeland in search of a better life elsewhere, and the many difficulties and obstacles they face on the journey, as well as the racism that they face.

The story tells of a Syrian family made up of a father, mother and a newly born child and how their lives are turned upside down when the father mysteriously disappears and the mother receives a message that they have to flee the country because the father was taken into mandatory military service.The mother and daughter leave for a European country and there, like other refugees, they face difficulties. They feel alienated by the host community and the camp where they are living is burned, until one day they find themselves face to face with their father and their lives gradually return to normal. One day during a demonstration against the refugees, the father is separated from his family and beaten and arrested. The wife, after losing the ability to protect her child, is forced to leave the country on an arduous journey.

Kafi pointed out that her time in Syria, despite her age at that time, was the most beautiful time of her life, and therefore she tries to keep these memories close to her.

She said, “For me, writing was a way to communicate my message and influence peoples convictions and rulings on others.”

Kafi revealed that her first novel resonated widely with literary circles in the media and many Arab and Kurdish media outlets interviewed her.

According to Kafi, she received unlimited moral support from her family, classmates and teacher, Phillip Unsinn, who read the novel and helped her correct it and organize the book signing party, which helped greatly with the success of the novel.

The writer indicated that she is trying, through her writing, to provide information that many people do not know about Syrian customs and traditions, especially for the refugee generation, and to make the German reader learn about Syrian culture and the customs of society.

Kafi aspires to complete her studies, continue her literary experience, share her message and present what is interesting and useful, expressing her hope that peace and love will prevail throughout Syria and the world.