Following an explosion that hit a joint patrol in Idleb, Russia has hit back, bombing the town of of Ariha in northern Idleb reports Zaman Al-Wasl. 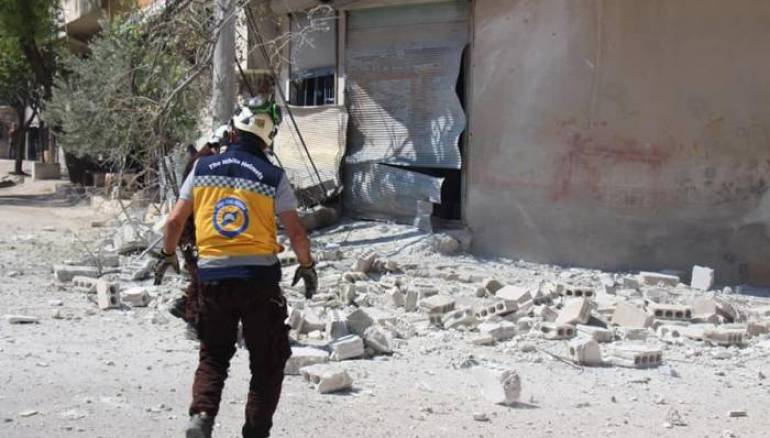 One person was killed and four people wounded in a missile attack by regime forces on northern Idleb province, activists told Zaman Al-Wasl.

The attack, which targeted the town of Ariha, wounded a woman and three children.

Russia’s warplanes have pounded an array of villages in Idleb province, in retaliation for a roadside bomb that hit a Russian-Turkish military patrol and left three Russian soldiers injured.

The Russian Ministry of Defence said the joint patrol was hit by an improvised explosive device at 8:50am as the soldiers’ convoy patrolled the M4 highway in the southern part of a de-escalation zone.

Russia and Turkey launched the patrols along the strategic highway in March following a ceasefire agreement aimed at stopping heavy fighting in and around Idleb, the last major bastion for anti-government forces in Syria’s war.

Rami Abdel Rahman, the director of the UK-based Syrian Observatory for Human Rights (SOHR), reported that, “numerous explosions were heard as the patrol passed through a village northeast of the town of Ariha.”

The blast occurred, “despite Turkish forces having thoroughly combed the area 24 hours before the joint patrol set off along the road that separates areas controlled by the rebels from those held by government forces, according to the ceasefire”, he said.

No such patrols had yet been able to circulate along the entire length of the road as stipulated in the ceasefire agreement, from the village of Tarbana in the east of Idleb province to the village of Ayn Hawr in the north of Lattakia province, according to the SOHR.

Fighters opposed to the patrols, as well as protests against them, had previously prevented them from advancing, but without them ever being targeted like this, it said.

Russia and Turkey have long supported opposing sides in Syria’s war – Moscow is a major backer of Syrian President Bashar al-Assad while Turkey supports certain rebel groups – but the two countries have closely coordinated in the past and agreed upon several deals to reduce hostilities.

Home to some 3 million people, the Idleb region in northwest Syria is dominated by Hay’at Tahrir al-Sham, an armed group that mainly consists of members of Syria’s former al-Qaeda affiliate, and its rebel allies.

A Russian-backed government offensive in northwest Syria displaced nearly a million people between December and March, but thousands have returned since the truce came into force.

After Tuesday’s attack, Russian fighter jets launched several air raids on rebel positions in the countryside of Lattakia province, according to SOHR.