A photo of Bashar al-Assad was torn up in Daraa, amid rising tensions and clashes between rival groups reports Enab Baladi. 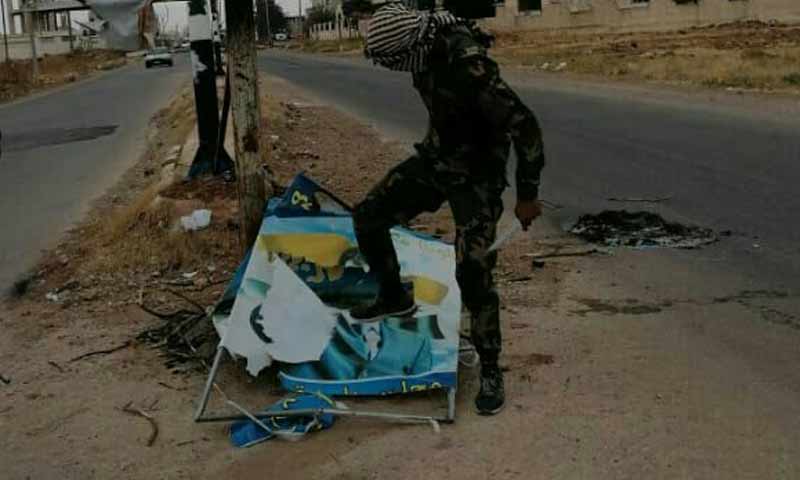 A number of young men in the rural eastern Daraa town of Saida tore up a photo of Syrian President Bashar al-Assad on Monday at a regime checkpoint in the area.

An Enab Baladi correspondent in Daraa said the incident came after the death of a member of the Russian-backed Fifth Corps, who died from injuries he sustained when regime forces opened fire on him and his companions in the town of Muhajja in rural eastern Daraa.

Demonstrations broke out yesterday in the towns of Kaheel and Muhajja in rural eastern Daraa during the funeral of Fifth Corps fighters killed at the Muhajja checkpoint. Protesters raised slogans calling for the fall of the regime and President Bashar al-Assad.

Clashes flared up on Jun. 27, 2020, between fighters from the Fifth Corps and regime forces, after personnel at the Muhajja checkpoint attacked former local council president Wassim Muhammad.

The clashes resulted in the killing of three Fifth Corps fighters and a regime officer and personnel member. Members of the Fifth Corps removed regime checkpoints in the towns of Saida and Kaheel in rural eastern Daraa.

These tensions come after an explosive device on a Fifth Corps bus on Jun. 20, 2020, killed 10 fighters and wounded 25 others.

Ahmad al-Audeh, the commander of the Eighth Brigade of the Fifth Corps and a former opposition commander, declared his intention to form a “new army in Houran” after the incident.

In the mourning tent, in front of delegations of mourners for those killed in the bombing, Audeh said, “Soon, Houran will have one body and one army. This is not just for the defense of Houran, but rather it will be the most powerful tool for defending Syria.”

The Fifth Corps was formed at the end of 2016 by Russian orders to be an auxiliary force to the Syrian regime, which was advancing on opposition forces. After the regime captured southern Syria, Audeh joined the Fifth Corps and entered into a direct relationship with the Russian guarantor.