Syria has condemned the Ceaser Act in the strongest terms saying the the US will be held responsible for the misery of the Syrian people writes SANA. 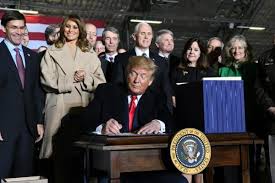 Syria has strongly condemned the tightening of coercive measures imposed on it by the US administration through the so-called “Caesar Act” affirming that it represents another form of terrorism that has shed the blood of Syrians and destroyed their achievements.

A Foreign and Expatriates Ministry official source said in a statement to SANA on Wednesday that, “The Syrian Arab Republic expresses strong condemnation of the tightening of the coercive measures imposed on it by the US administration through the so-called Caesar Act, which is based on a set of lies and fabrications by parties that are hostile to the Syrian people. This comes in the framework of their declared war in which they use the dirtiest types of weapons that include terrorism and the economic siege, in addition to political pressure and misleading media.”

The source added that the imposing of this act by the US administration is considered an outrageous violation of the simplest human rights and international humanitarian law, and it makes the US administration bear a primary responsibility for the suffering of the Syrians in their lives and livelihood, and that economic terrorism is just another form of terrorism that has shed the blood of the Syrians and destroyed their hard-earned achievements.

The source noted that at a time when the world is united in facing the coronavirus pandemic, the US administration, which suppresses its people to embody the racial policies and continues the approach of hegemony and arrogance in the international arena, continues its hostile policies which are represented by imposing blockades on people and depriving them of their right to obtain what is required to face this dangerous pandemic.

The source asserted that Syria, whose people and courageous armed forces have confronted the Takfiri terrorism and inflicted a defeat on the hostile scheme, will face with pride and the same determination this unjust US decision, and the unity of the Syrians’ efforts to protect the national economy will guarantee the failure of this measure and will limit its impacts.

The source concluded by saying that Syria calls on the international community to work on lifting all forms of the illegitimate unilateral coercive measures, and to put an end to these practices that contradict with the provisions of international law and lead to escalating tensions in international relations in a way that poses a serious threat to security, peace and stability in the world.

In a relevant development, Syria’s Permanent Representative to the UN Bashar al-Jaafari has insisted that continuing to impose unilateral coercive measures on Syria and a number of other states is a dangerous gap in the structure of the global solidarity, which is needed to enhance the capabilities of states equally, affirming that the economic siege affects the lives of two billion people and hinders the efforts to combat the coronavirus and the achievement of sustainable development which entails lifting those measures.

Jaafari’s remarks came during a video conference held at the UN headquarters in New York, at an initiative by a number of states, including Syria, Venezuela, Russia, China, Iran, Cuba, Zimbabwe and Belarus under the title, “Impact of unilateral coercive measures on global solidarity in confrontation of COVID-19 and the necessity to adhere to the UN Charter and enhance international cooperation, and guarantee that no one is left behind”

Jaafari added that the US and the EU still ignore the UN and international calls by the UN Secretary-General and many regional and international organizations and bodies for putting an end to these illegitimate economic sanctions.