Syrian men, who were worked as security guards at oil fields, have found themselves forced to fight on the frontlines for rogue General Khalifa Haftar's militias in Libya writes Al-Araby Al-Jadeed. 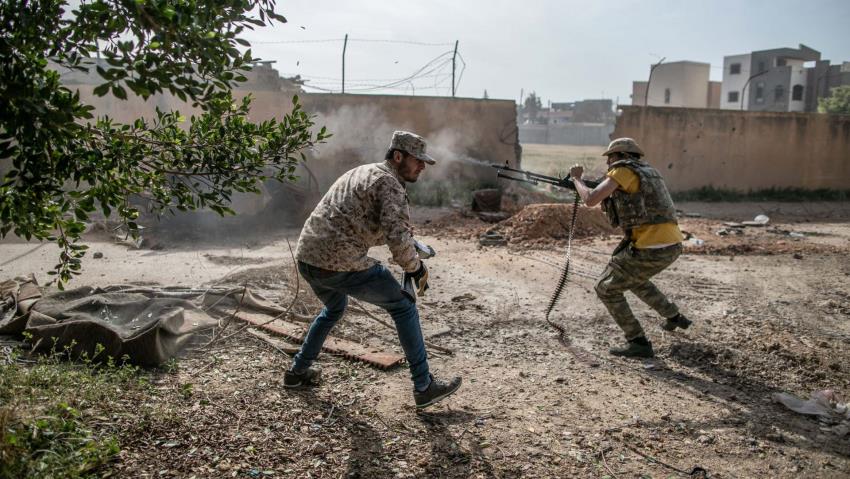 Young Syrian men were recruited by regime officers to travel to Libya for civilian work, only to find themselves forced to fight on the frontlines for rogue General Khalifa Haftar’s militias, sources revealed to The New Arab.

The families of about 250 Syrian men from the areas of As-Suweidah, Quneitra, and Damascus have called for the return of their sons from Libya, where they are fighting for Haftar’s self-described Libyan National Army (LNA), the sources told TNA’s Arabic-language service.

The young men were recruited at a military base near the Syrian city of Homs, the source said, told they work as security guards at oil fields for a company supervised by the Russian security firm Wagner Group.

Upon arrival in Libya, the Syrian men were reportedly transferred to a military base in the Marj region of eastern Libya, supervised by the UAE.

There they were informed they would undergo advanced military training to prepare the men to fight on the frontlines for Haftar-affiliated militias.

The sources told The New Arab that several Syrian men who objected and refused to participate were detained. Some were allegedly tortured.

Mohammed Al-Zamel, 29, from Quneitra, told The New Arab that he was recruited to work in Libya as a “volunteer” in the oil fields.

He and several others met by a Syrian recruiter and a Russian officer. They were told they would be going to Libya to protect Russian soldiers, Zamel said.

Zamel said contracts were signed during this meeting which stated that they would travel to Libya “to protect security installations and guard the oil fields in a civilian capacity”.

Days after the contracts were signed, the volunteers were asked to gather in Quneitra so they could be transported to Homs, and then on to Libya.

Al-Zamel told The New Arab that he, along with several others, returned to their villages upon realising they would have to fight on the front lines for Haftar’s whose forces are currently besieging the Libyan capital, Tripoli.

He said that they were subjected to verbal harassment by regime and Russian officers and threatened with arrest.

Libya is embroiled in a civil war between militias linked to Khalifa Haftar’s in the east and forces loyal to the UN-recognised Government of National Accord (GNA) in Tripoli.

Since Hafter’s forces launched an offensive on the Libyan capital in April 2019, both the LNA and the GNA have reiterated accusations that the other was deploying foreign forces in the battle.

The GNA is supported by Turkey, while the Haftar-backed eastern administration receives military supplies and other support from Egypt, the UAE and Russia.

In March, the unrecognised eastern Libya-based “authority” allied to Haftar established diplomatic relations with the Assad regime and signed a memorandum of understanding pledging to work together against “Turkish interference”.