Despite the steady stream of thousands of desperate people fleeing the violence in Idleb, no new camps are being set up to protect the vulnerable people reports Alsouria Net. 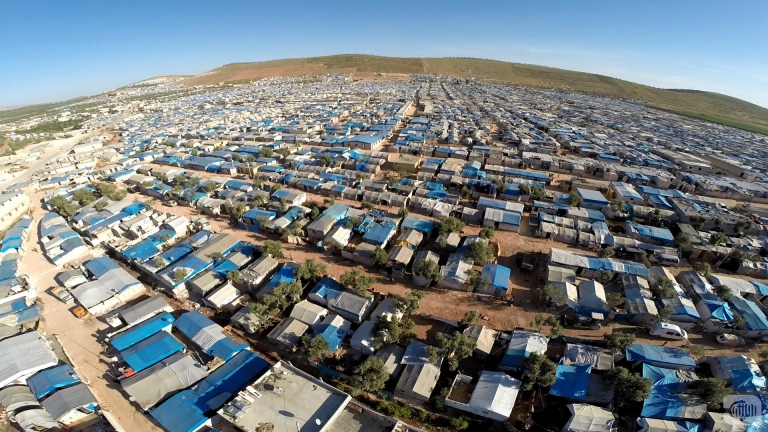 With hundreds of thousands of displaced people reaching the Syrian-Turkish border over the last few weeks, and a large number of them remaining out in the open despite the low temperatures and the presence of women and children, a number of questions have emerged about the reasons for the shortcomings of the humanitarian organizations, both local and international, in terms of coping with the disaster and securing tents and food aid for the displaced people.

With tens of thousands of people from the Idleb and Aleppo countrysides arriving in the Afrin area and the Euphrates Shield area, as well as villages in northern Idleb, a large number of them have not been able to find temporary shelter, according to a number of sources on the ground, contacted by Alsouria Net in these areas.

Alaa Nanoua, one of those recently displaced from the village of Maarat al-Nasaan in the Idleb countryside to the city of Afrin in the northwestern Aleppo countryside, claims that the mosques and temporary shelter centers and schools are filled with displaced people, and they have no housing, which caused him to go back with his family to the Atmeh camp and to set up with all his relatives in one tent.

A number of humanitarian organizations have been prevented by some local agencies from opening up new camps, claiming that Turkey intends to return these people to their areas.

Atef Nanoua, head of the Molham Volunteering Team, said in a post on Facebook on Feb. 13, 2020, that there had been a decision not to set up camps in the northern Syrian cities.

He added, “Unfortunately we do not have anything. There has been a decision not to set up camps in the cities of northern Syria, and there has been no pressure from the notables in these cities, to protect our people from the displaced areas.”

Nanoua laid the blame on humanitarian organizations for ignoring the suffering of thousands of civilians and a lack of pressure on decision makers, saying, “The directors of the NGOs fear for their organizations’ licenses. The heads of the local councils fear for their positions. We have been prevented from setting up tents on our land.”

Regarding the reasons for stopping new tents from being set up for displaced people, Ahmed Abu Shaar, head of programming in the Molham team, said that the recent disaster was beyond the capabilities of the local humanitarian organizations, while the international organizations need a long time to respond to new disasters because of the major amounts of bureaucracy that governs their work.

Abu Shaar told Alsouria Net that the reasons for the lack of mobilization to build new housing were due to the fact that, “setting up camps in the Olive Branch and Euphrates Shield areas needs approval from the Turks, and they have not given that yet.” He said that these areas, “have not seen any new camps set up, despite the huge number of displaced.”

The aid activist continued: “With regards to Idleb province, the lack of funding is the main reason that prevents the NGOs from setting up new camps. Each camp needs a major amount of money, beginning with renting the land, and then up to sewage networks, putting gravel on the ground, and other expenses that are beyond the local NGOs’ capabilities.”

In the same context, an aid official working in a humanitarian organization active in northern Syria discussed the obstacles put in place by the Salvation Government, with “pressure from Turkey” not to set up new camps for displaced people near the Turkish-Syrian border.

The official, who asked not to be named for security reasons, said that the Salvation Government’s agency for affairs related to displaced people, responsible for humanitarian issues, had prevented the group from working and setting up a new camp, composed of 500 tents near the Atmeh village, on the pretext of not having completed a study.

The official added that this problem was faced by a number of NGOs recently, and attributed the reason to “an attempt by the Salvation Government to put pressure on Turkey and to send newly displaced people to the Euphrates Shield and Olive Branch areas to find a solution for the current situation.”

The aid official said that some informal tents, which had been set up by some displaced people in informal areas were removed and that their owners were asked to go to new places.

The Humanitarian Response Coordinators team said in a statement on Thursday that nine displaced civilians in the camps in northern Syria had died from the brutal cold and poor heating.