Assad's forces have unleashed a brutal barrage of artillery and airstrikes, targeting schools in Idleb and killing and wounding teachers and students writes Alsouria Net. 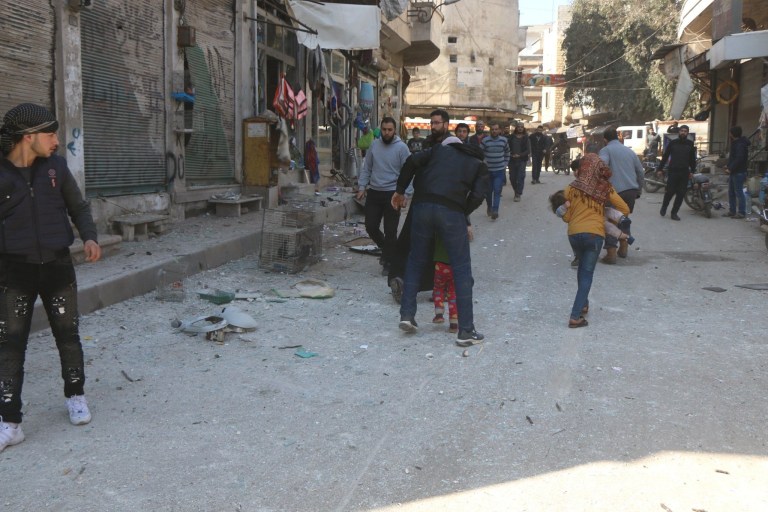 On Tuesday afternoon, Assad’s forces struck a number of schools in Idleb city with warplanes and artillery, killing three teachers and a student, and wounding others.

Witnesses in Idleb city told Alsouria Net that there was a, “systematic bombardment campaign today which struck a number of schools in session.”

On Tuesday, the Syrian Civil Defense documented the deaths of four civilians, including two female teachers, a male teacher, and a female student. Thirteen others were wounded, including children, during Assad forces’ bombardment with 16 artillery and rocket strikes, including four cluster rockets and two strikes by warplanes that hit two schools, a kindergarten, and residential districts in Idleb city.

An activist, Emad Idlebi, in Idleb city told Alsouria Net that: “Assad’s forces struck Idleb city with a number of rockets containing cluster munitions, which directly struck Idleb schools, mainly: Khaled Shaer, al-Hurriyeh and the Baraem Kindergarten and Model School.” He added that these attacks killed teachers Saad Telja, Hani al-Mahimed, and wounded eight others as a preliminary toll and the partial destruction of these schools.

The Directorate of Education in Idleb said on its official online platforms that, in addition to the teachers killed by the bombing, the teachers Lazkine Hamo, Mahmoud Sobeih, Ramiz Raju, Muhammad Sousi, Hassan Shawa and the female teacher Imama were wounded, some seriously. It said that, “dozens of students were injured by the deliberate targeting of schools by Assad’s forces.”

As in the recent days, large parts of Idleb governorate were subjected to intense air and artillery shelling by Assad’s forces, Russia, and Iran, especially the areas of Jabal Zawiya and the south of the province.

Assad’s forces, Russia, and Iran are intentionally targeting civilian installations, with dozens of schools, bakeries, markets, and hospitals bombed during the current military campaign and previous campaigns in Idleb and other Syrian regions. The attacking forces have adopted a tactic of striking civilian installations as military targets, before attempting to advance on the ground.

The Humanitarian Response Coordinators team have documented the losses of facilities and infrastructure hit by Assad’s forces, Russia, and Iran in northern Syria during January, coinciding with calls by the United Nations to avoid targeting civilian infrastructure, and facilitate humanitarian activities without obstruction.