The price of bread in Syria is rising and the queues outside bakeries are getting longer, but the government insists that there is enough writes Al-Watan. 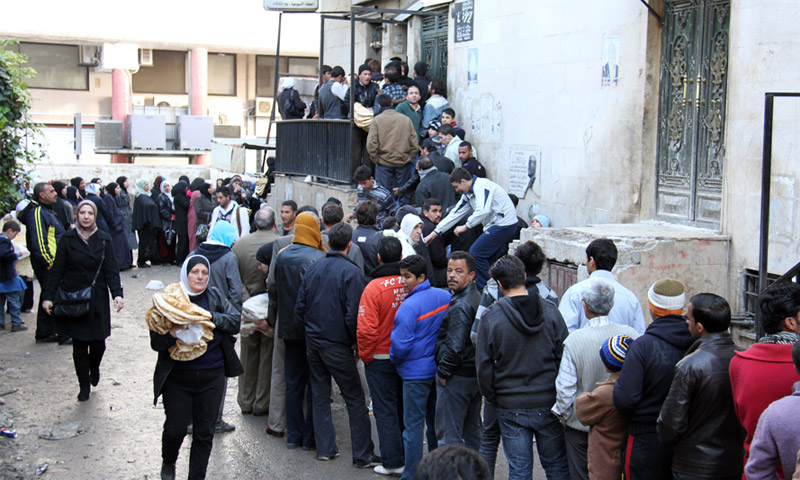 The director of the Syrian Bakeries Institution, Jalil Ibrahim, said there is great demand for bread, as Syrians have increased their consumption over the past few days due to the cold wave.

Touring some bakeries over the past few days, there have been noticeably more crowds than usual, and the problem is not being addressed. Citizens complained of standing for long hours to obtain food, while some spoke of a significant rise in prices at private bakeries for flatbread, where the price of a bundle of bread reached 500 Syrian pounds, and also the price rise for bread loafs.

Others pointed out that the price a bundle of flatbread increased by 150 Syrian pounds in just a month with illogical justification, while cakes and loafs also increased. The price of a kilo of cakes exceeded 1,000 pounds in some places, while some said that some bakeries had stopped making loaves because the new price did not match the cost, according to some stores.

Ibrahim pointed to the campaigns undertaken by the relevant authorities to prevent the spread of sellers in front of bakeries, adding that the trade in goods has shrunk in large amounts due to these campaigns, and that it has included various bakeries in the provinces.

Regarding reports of the possibility of including bread in the smart card system, Ibrahim explained that the institution had not reached any decision.

He also noted that the production of baked goods currently covers what the country consumes, with production exceeding consumption, adding that there were 200 bakeries at the governorate level.

The Damascus supply director, Uday Shibli, said that daily tours were ongoing at various stores and that any prices over the prices determined by the official bulletins is regulated, and that the store is closed if it does not post prices or if it sells at excessive prices exceeding 20 percent. He added that a number of violating stores had been regulated in the past.